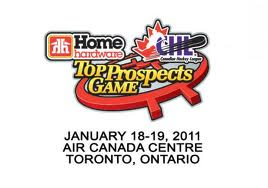 The CHL released it's invite list for the 2011 Top Prospects game at the Air Canada Centre in Toronto and on Rogers Sportsnet January 19th. Similar to the World Junior team but on a smaller scale as it's only one game, the list is always debated. There are some good discussions this year, and even some interesting names behind the bench. Neate Sager from Buzzing the Net has some interesting thoughts about Bobby Orr not coaching in this game.

At first glance I would agree with Neate that team Orr has the edge, but it should be close. Orr has Couturier, Landeskog, Siemens and Murphy. Cherry counters with RNH, Brandon Saad (who surprisingly didn't make team U.S.A for the WJC) and David Musil who like the Orr 4 are highly ranked. I could easily see Siemens as the first WHL drafted Dman this year, and he might be the first blueliner after Adam Larsson. That's a spot scouts will have to make a choice of between Murphy and Siemens. Murphy is a lot like Ryan Ellis was in his draft year, with the exception being he isn't representing Canada at the WJC, and for some reason didn't make the most recent U18 team. In the 2009 draft Victor Hedman was the obvious choice for the first defenceman. Ellis was taken after Oliver Ekman-Larsson and Jared Cowen.

The absence of Michael St. Croix from the WHL is interesting. As Guy pointed out in an earlier post, we got wind that St. Croix was on the original list, but might (and could still be) and injury replacement. Most scouts we talked to figured his red hot play of late - 24 points over an 11 game streak - should have earned him a spot. The Oil Kings are obviously disappointed but there were questions about St. Croix earlier this season, and maybe his point bonanza started a week or to late. G.M. Bob Green told me today he feels this will motivate St. Croix even more, which is good news for OK fans as sometimes a kid can go the other way in these situations.

I hope Christopher Gibson is healthy by then as the Finnish born, Notre Dame (Wilcox, Saskatchewan schooled, and QMJHL goalie who speaks like he's lived all his life in Quebec will be a treat to watch. He won a National midget championship with the Hounds and has good numbers this year when he's played. Gibson from those I've talked to could be the first CHL goalie taken, as long as he returns and doesn't leave any doubt in the minds of head scouts about his health.

Doug Gilmour as a head coach with Don Cherry shouldn't surprise anyone as Cherry has long been a super fan of the now Head Coach of the Kingston Frontenacs. I haven't heard very many good reviews on Gilmour's coaching but the Frontenacs have made some noise this year and look ready for a playoff run so maybe 'Killer's' on the mark now. The franchise is desperate for some playoff success as by my count the reached the league semi-final only 3 times in the last 30 years and have missed the post season 2 of the last 3 years.

This is always a fun game to watch, but as the scouts will tell you it's only a small sample size compared to how many times these kids are viewed. Who it's really interesting for are the NHL G.M's. For some it might be the only time they watch some of these kids.
Posted by Dean Millard @ 1:54 AM

A couple of points
I think the bigger challenge to the number two defense prospect is Doug hamilton over siemens.
Ryan Murphy is much faster than ellis. Hence he might be valued higher than what Ellis was.
Another disappointment is exclusion of Alexander khokhlachev who has been playing very well for the spitfires.
I would take st croix over four or five of the hguys from ohl. I don't like the fact that there 18 guys from ohl alone. Nemestniekov, rackell among others are underachievers and I think both st. Croix and khokhlachev got a raw deal.