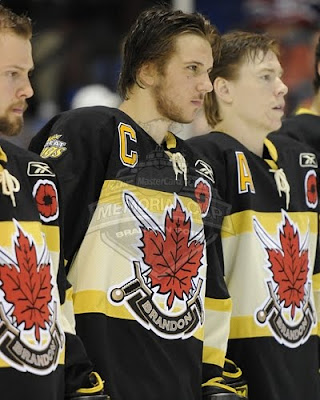 The LA Kings made the coaching and scouting staff of Hockey Canada breathe a little easier on Thursday. By sending Brayden Schenn back to the Brandon Wheat Kings of the WHL, the Kings also gave Hockey Canada it's #1 centre and all around best player. Schenn also makes the Wheat Kings an interesting team to watch, as getting back last year's co-captain could easily vault them a few spots up the standings.

The Wheat Kings sit tied for a playoff spot right now but are only a few wins out of 6th, and if they keep Schenn they could make a run for a home playoff game, which would be a pretty amazing accomplishment considering the players they lost after hosting the Memorial Cup.


Brandon paid the price for getting to the final last year, but ask any team that hosts the Memorial Cup and they'll tell you being one of the two best teams in the CHL is worth the price of admission.

Will Schenn be dealt after the World Junior or stick in the Wheat City to help make a run? Only Kelly McCrimmon knows that and I'm sure he won't tell anyone when Brandon rolls into Edmonton Friday night to take on the Oil Kings, the team with whom they shared 8th place and the final playoff spot.

While Kitchener, Windsor or Barrie can't expect Jeff Skinner, Cam Fowler or Kyle Clifford back anymore, the World Junior Championship could get better if a few more teams loaned some players.

Trading Marco Sturm might make it easier for Boston to keep Tyler Seguin, but that deal strangely fell through, for now anyway. Meaning the B's are still tight to the cap so they are reportedly mulling over the idea. However I haven't heard them say anything on the matter. Seguin himself doesn't want the decision left up to him. 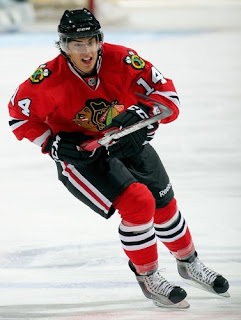 Team Canada did get Brandon Pirri (pictured) from the Chicago Blackhawks and he was playing for their farm club in Rockford. Will Jeremy Morin and Nick Leddy also be made available by Chicago for the defending champs Team USA? Both were playing in the AHL with Pirri until Morin was called back to the big leagues to cover for Marian Hossa who is out 2-3 weeks.

Phoenix might grant Oliver Ekman-Larsson's wish of playing for Sweden at the tournament. He could pair with top 2011 prospect Adam Larsson to help Sweden win a title, as Tre Kronor has failed to live up to pre season hype the last few years. The Oilers have decided to keep Magnus Paajarvi with them and I see both sides but selfishly would love to see him in Buffalo.

Do we overvalue this tournament? Let us know how you feel about the event.
Posted by Dean Millard @ 10:37 PM

Another name worth throwing into the equation for Team USA is Kyle Palmieri, currently playing for Anaheim's farm team in Syracuse. He played last year and most are assuming he will be released, but I haven't seen any statement from the Ducks one way or another.