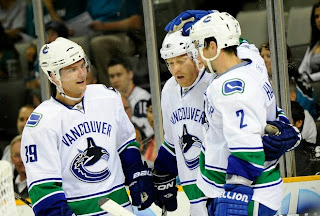 Vancouver prospect and Manitoba Moose rookie Cody Hodgson is on the shelf again. The good news is it's not his back. The bad news is he has a broken orbital bone. What makes it even worse is that he took the stick from teammate Billy Sweatt in practice. Tim Campbell of the Winnipeg Free Press has the story here.

Ben Kuzma of The Province has word that Hodgson will need surgery to repair a chip and crack. Unfortunately injuries aren't new to the 10th overall pick in 2008. He played only 13 games in 2009-10 due to a back injury that at one point seemed like it would never go away.

Hodgson did recover and started the season with the Moose, where he got off to a slow start but put up 11 points in 11 November games. It's terrible time for Hodgson to be injured again as he could be in the NHL with former Camrose Kodiak/Minnesota-Duluth Bulldog Mason Raymond sidelined right now. On the season he has 10 goals and 6 assists in 24 games.

That's not all the Canucks/Moose are dealing with right now, rookie Jordan Schroeder left their game against Oklahoma City Friday night and didn't return. He wasn't in the line up Saturday as the Moose lost to San Antonio.

At one point Hodgson was considered one of the top prospects in the world and there was talk of him starting with the Canucks the year after he was drafted. While this injury isn't thought to be a long term thing, it's still another set back in his development. Thankfully the Canucks have a pretty good top 6 and they aren't starving for Hodgson right now, but he'll be needed next season.
Posted by Dean Millard @ 1:08 AM

Bad breaks or not, the Canucks and the Moose need to keep their focus for the tasks at hand. Injuries are speed bumps in a long season, which hopefully lasts into the Summer.