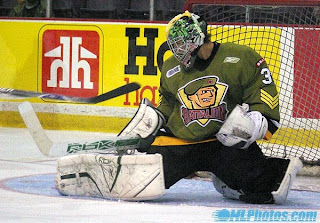 The Pipeline Show has learned that a contract between the Edmonton Oilers and goaltender Bryan Pitton is as good as done.

One source told me today that the paperwork is all done and that it's just a simple matter of the player scratching his name on the bottom line to salt the agreement away.

That said, expect a formal annoucement from the Oilers in the next week or so. A bit tongue in cheek there but TPS did publicize both the Cody Wild and Pitton ATO signings several days before the organization was heard from.

Pitton was Edmonton's 5th round selection back in 2006. This past season he was an OHL All-Star while a member of the Brampton Battalion where he put together a 22-13-2 record in 39 games (sidelined with a high ankle sprain to start the year). He had a 2.54 GAA and .911 SV% during the regular season and improved both of those in the playoffs where he posted 1.80 GAA and .938 SV% in Brampton's first round loss.

It would seem most logical to slot Pitton into the Stockton Thunder line up for 2008-09 but it remains to be seen what will be done with netminder Glenn Fisher who played there this past season for the Oilers. Fisher's entry level contract expires at the end of June but there are those in the organization who would like to bring him back, perhaps on a 100% minor league deal.

Pitton will be in Edmonton in June for the Oilers summer prospect camp.
Posted by Guy Flaming @ 10:41 PM

Nice signing imo. It isn't like this organization has longterm stabiity in net so the more bodies the better chance one of them will step forward.