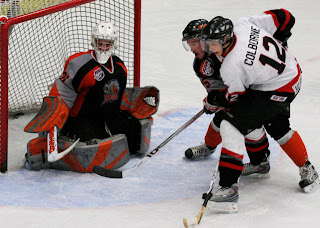 Each Day of the Royal Bank Cup, Camrose Kodiaks forward Joe Colborne, who's predicted to be a first round NHL draft pick this June will give us a first hand look at what it's like playing for a National Championship. (photo courtesy Camrose Kodiaks) Here's Day 4, Monday May 5th, 2008:


Well, we are 2-0, although it would be hard to find anyone who was happy with our performance (Monday). Humboldt was a big, strong and hard working team, and if not for a strong game by [Allen] York we could have ended up 1-1. I guess I spent too much time watching Jessie Todd's move on his penalty shot in Penticton (he fumbled the puck and barely got a shot off), because when i got a partial breakaway today, I deked the goalie out but missed the empty net. On a positive note, we finally played against a player who was heavier than Macleod! The program said he was only 5'7" and 225 lbs, but he seemed both shorter and heavier than that!

After the game, there was a sense of relief from our team, as we finally had some time to relax. The fact that we have a day off tomorrow really allowed us to relax and enjoy the moment. Adam Zunte, Norm's son, who is helping us this week, was officially welcomed to the team by being shoe-checked at our dinner at a restaurant called St. Hubert's. He was an easy target, as he was not expecting anything at all, but was a good sport about it all! And that is much more than you can expect from the other trainers, who tend to pout for the rest of the day when we shoe-check them. After dinner we had some free time to hang out at the hotel, with some guys going to the pool for a bit, some guys playing board games that they picked up at Wal-Mart and some just hanging out in the rooms. Overall, it has been a great day, and we look forward to another one tomorrow.
Posted by Dean Millard @ 2:03 PM