Each Day of the Royal Bank Cup, Camrose Kodiaks forward Joe Colborne, who's predicted to be a first round NHL draft pick this June will give us a first hand look at what it's like playing for a National Championship. (photo courtesy Camrose Kodiaks) Here's Day 8, Thursday May 9th, 2008: 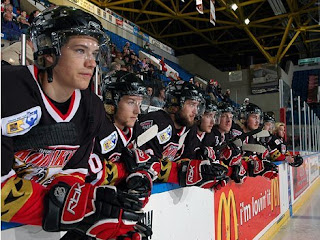 It is amazing how a person can love playing hockey in front of as many people as possible but wishes for the opposite if he has to speak. Today was the award's banquet, and I had to make my inaugural acceptance speech for the CJHL Player of the Year.

We woke up this morning about 9, had a quick shower (Well, Nigel did, I skipped it) and grabbed a quick bite before heading to what is most likely the last junior practice some of us will ever have. That said, we didn't waste any time getting ready and out on the ice. Boris didn't want us to be out there too long, so we just skated in our tracksuits, with skates, gloves and helmets. After about 15 minutes, Bo wanted us off the ice, but it was tough to leave. Karl Stollery, who is leaving for the NCAA [Merrimack - Hockey East] as well as I am, kept me company as we stayed on as long as we could, without incurring the coaches' wrath.

We travelled off to lunch, then back to the hotel where we had almost the entire afternoon and evening off. I was very grateful for the time off, as I still had much of my speech to write. Clayton Jardine was the unlucky soul who I conned into helping me brainstorm the second half of my speech, and he did a great job.

When we got to the banquet, the nerves began to set in a little bit. Having Mike Connolly and Wyatt Hamilton pretend to talk with stutters throughout dinner didn't help much! But a great meal from the event staff helped me calm down, and some past experience in public speaking helped me out a bit as well. I was very proud to see Allen York get the Top Goaltender award, and almost as proud to see Andre Herman get the heavily coveted Most Sportsmanlike Award (Or the Lover Award, as a few guys told Herms). There were a few other words used for Andre, but I cannot repeat those.

When all was said and done, I actually enjoyed speaking, and it was a great honour. Marc Crawford was the guest speaker and he was great. He was both funny and insightful, and bestowed some of the knowledge that he has gathered from a long career in hockey. But the most exciting part of the day was the fact that tomorrow is the our chance for redemption. It's taken a year to get back, but we have made it, and we will look to make sure that we dont allow what happened last year to happen again.
Posted by Guy Flaming @ 10:01 PM