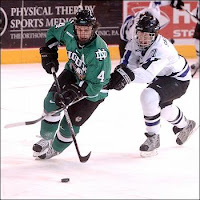 The Oilers announced the roster for their annual prospect camp starting June 1st, and there was one name noticably absent. North Dakota D-man Taylor Chorney, who did attend last year wasn't listed.

Now Chorney did injure his knee in the Fighting Sioux's final game during the NCAA Frozen Four tournament, but at the time it wasn't considered a serious injury and I'm told it's pretty much healed by now, so we should be able to rule that out.

I have spoken to several sources on this issue and have been told it is a contract issue, and that the agent is using whether Chorney comes to camp as a negotiating tactic.

I have also been told the first offer made was a little high and suprised the Oilers quite a bit.

Talks are continuing and I'm sure things will be taken care of before June 1st and Chorney will be on the ice at Millenium place. I'm sure he wants to be there, as much as the Oilers want him there.

Meanwhile there are some interesting players that will be there for sure.

Ryan O'Marra and Alex Plante both had seasons to forget and will be hoping to make good impressions for the Oilers brass.

Cody Wild and Bryan Lerg - signed after the NCAA season ended from Michigan State - will be trying to make the jump from college to the pro game.

And Chris Vande Velde is starting to look like a great find by the oilers, drafted in the 4th round of 2005, the power forward looked like a man among boys at times last year with UND.
Posted by Dean Millard @ 5:17 PM

Hopefully Chorney gets signed soon, I am interested in seeing how he stacks up against our other young offensive d-men. Wild, Petry, and Bisaillon.

Doesn't using development camp as a negotiating tactic seem a little foolish? It seems like one of those things where Chorney has as much to lose by missing it as the Oilers do.

Yeah, I'm not sure what he feels that he'd gain from it. Unless he's trying to hide/protect his knee injury. If he were to be re-injured without a contract, that would be poor management by his agent.

this strikes me as a ploy from his agent, not him, he doesn't strike me as the hold out kind of kid