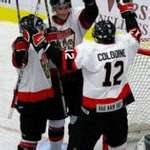 Each Day of the Royal Bank Cup, Camrose Kodiaks forward Joe Colborne, who's predicted to be a first round NHL draft pick this June will give us a first hand look at what it's like playing for a National Championship. (photo courtesy Camrose Kodiaks) Here's Day 6, Wednesday May 7th, 2008:


We have officially completed our first goal of the tournament. Before we began, we looked to clinch first place in the round robin and secure home-ice advantage for the playoffs, and we completed that today with our 2-1 win over Cornwall.

It was nice to play a night game again, and it gave us a chance to sleep in today. We woke up and had another great breakfast, prepared by the chefs at the Ramada, and then returned to our rooms for some more rest and preparation. Nigel and I made sure to watch some CMT for a bit before grabbing a quick nap.

Pre-game meal flew by and once we got to the rink it was great to hear that Jeremy Beirnes would be in the line-up. It was very interesting to listen to the inebriated fans behind our bench make fun of his failed perm attempt. It gave some of us some new ideas because all of our beaks were starting to get repetitive.

After the game, it was a race to get undressed so that we could get to Kelsey's where [coach] Boris [Rybalka] and the coaching staff allowed us to sit with our parents. Jordan Heck seemed on a mission to cause as much havoc as possible, leaving no one safe. He covered numerous people's shoes with ketchup, including Andrew MacWilliam's dad, Dave A's brother, Nigel and Dylan Olsen. I would certainly be sleeping with an eye open if I was him, as he has maybe bitten off a little more than he can chew.

After the meal, we took the quick walk back to the hotel where we now prepare for Oakville in our final round robin contest and get some sleep. And maybe a bit of CMT too.
Posted by Dean Millard @ 11:57 PM

Congrats on your wins guys! Thanks to you Joe and the others for your blogs. It is great to see your prospective on the goings on in your organization. Keep up the good work both on and off the ice. We are some pretty proud fans back here in Camrose. You have RBC fever so bring it on home! Ole! ole! ole!
Ron & Sue Fowler

When Joe gets to Denver he'll find that ketchup tastes better on American food than the shoe leather food they eat up in Canada. :-)

Keep up the great Blog and good luck.