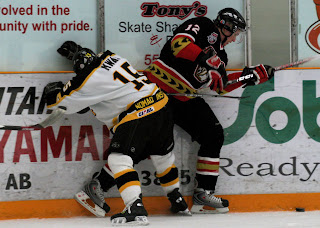 Each Day of the Royal Bank Cup, Camrose Kodiaks forward Joe Colborne, who's predicted to be a first round NHL draft pick this June will give us a first hand look at what it's like playing for a National Championship. (photo courtesy Camrose Kodiaks) Here's Day 5, Tuesday May 6th, 2008:


Today was the nicest weather that we have had since arriving. As we didn't have to play today, we were able to sleep in and have a great lunch at Kelsey's. It was almost as if I predicted what would happen in my last blog, as our particular target for a shoe-check today (Hint: He's a trainer but not the bald one) complained and pouted for the entire day, although some of his sullen attiitude could be contributed to the fact that neither he, nor his bald accomplice could score on our thirteen-year-old junior host Alex, who suited up in his goalie gear for our optional practice. Now, over the two years that I've been in Camrose I've heard many stories about the trainer's younger days playing hockey, but after seeing them out on the ice, I am going to have to double check the authenticity of their tales.

After the optional skate, some of us went out to the bank of the St. Lawrence River, and kicked the soccer ball around for a bit. Some of us welcomed the chance to catch a few rays of sun, but Dave Andreassen didn't feel like taking his shirt off for an unknown reason. At first we thought he was just a little shy, but I am sure it wouldn't be the fact that he had a few random bare patches of skin on his chest, from a badly attempted wax job last night.

It was a relaxing afternoon and evening, and we were very fortunate to have a beautiful dinner with our parents, billets and fans at the restaurant in our Hotel, courtesy of both the Kodiaks Hockey Club and the AJHL. It was very nice for me personally to spend some time with my dad, as we have been focussed purely on hockey since we have been here, and will continue to do so until the end of the tournament.

We ended the day with a prep meeting about tomorrow's game, and went over the schedule up until gametime. Judging by the schedule, it should be a great day tomorrow, but only if we finish it off with another win!
Posted by Dean Millard @ 9:53 PM

Your tales make excellent reading, Mr. Colborne.
As well as being a great player you are also obviously an intelligent, articulate young man.
Every success in all your future endeavors!

It has been great to read the blog all of you have been writing. It gives one a good view of what goes on during you treak for the RBC cup. Keep up the great work on and off the ice. All of you are the pride of Camrose and or Province!

JOE IF YOU READ THESE I CAN CONFIRM THAT THE TRAINER WITH THE HAIR WAS A GOOD HOCKEY PLAYER, AND SMART TOO, JUST ASK HIM...............
ALSO JUST CHECK WITH THE STATS GUY TO SEE WHY HE WAS SO SMART TO COME AND PLAY WITH A CERTAIN SENIOR HOCKEY CLUB