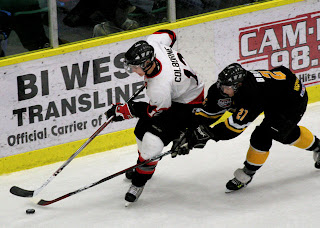 Each Day of the Royal Bank Cup, Camrose Kodiak forward Joe Colborne, who's predicted to be a first round NHL draft pick this June will give us a first hand look at what it's like playing for a National Championship. (photo courtesy Camrose Kodiaks) Here's Day 2:


Today was all about preparation

We woke up this morning about 9 and went right to practice where we had team and individual pictures taken. We continued with practice after pictures, and overall it was a much quicker tempo than yesterdays.

We also had the opening ceremonies today, which involved some "interesting" Irish Dances, Native American Dances, Tap Dances and bagpipes. Not perhaps a normal theme for a hockey tournament but it was a unique experience for us hockey players all the same. It was also the first time that we had a chance to size up all of the competition, and there was a competitive atmosphere throughout the ceremonies.

After the ceremonies, our team headed back to the hotel, where we have been relaxing and getting ready. Dinner was a lot of fun with the team divided on whether to cheer for Montreal or Philadelphia, although I think most of the guys cheering for Philly are just trying to get under Mathieu's and Andre's (diehard Montreal fans) skin. But as we finished and returned to our rooms, the only thing on our minds is our own game tomorrow.
Posted by Dean Millard @ 7:32 PM

gl joe. all of camrose is behind you boys.

Wow Joe - nice job. I can't wait to see you guys on the ice. Good luck to you and the team. Finish this year up right.