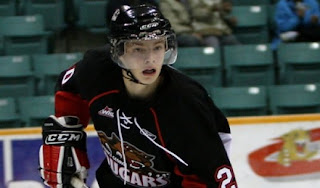 Last August Prince George Cougar forward Troy Bourke was the final cut for team Canada's entry into the U18 Ivan Hlinka Memorial Tournament. It could have been a devastating blow for the teenager, and it looked for a while that Bourke wasn't yet over the disappointment as he struggled out of the gate.

However he finished strong and it's why TPS has learned Hockey Canada has tapped him for their team this spring.


Bourke put up just 6 points in his first 15 games, but was steady eddy after that with 50 in 56, including 12 in his final 9 games as the Prince George Cougars made a push for the post season. They didn't make it but Bourke did take over the team lead in scoring on a young and up and coming team.

He's a versatile player that can generate offence and is available for the 2012 draft, meaning the U18 could be a massive tournament for him and NHL scouts.

One other guys you can put in stone, barring injury: Mathew Dumba of Red Deer. The defenceman has his head coach Jesse Wallin running the show for Hockey Canada, but that's not why he makes the team. Even the biggest Dumba hater has to admit the kid oozes potential. Playing in these big events will make him shore up his short comings in his own end. A great or poor showing will determine whether he's a top 5 pick or not.
Posted by Dean Millard @ 12:27 PM