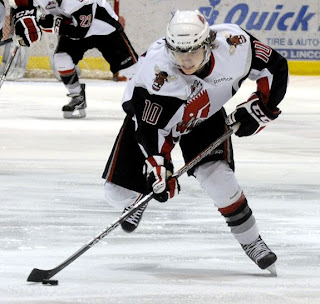 The Regina Pats opened their playoff series with bitter rival Moose Jaw with a 3-2 win, but since then it's been all Warriors including a 5-4 double overtime victory in game 4 Wednesday night. They now lead the series 3-1 and predictably are led in scoring by veteran Quinton Howden. But it's a rookie who's starting to turn heads.


Point was to young to play a full season in the WHL so he joined the team after his Calgary Buffaloes were knocked out of the Alberta AAA midget league playoffs. He scored his first WHL goal in the second to last game of the year, and has turned into a rock star in the last 2 Warrior victories.

In game 3 he notched what turned out to be the game winner, and Wednesday night he drew the lone assist on the tying goal, on a power play, then won it in double overtime.

He probably can't get on a ride at Disneyland but he scores game winners, and one scout told me he's the best small guy in the WHL since Brandan Kozun played in Calgary. "Ridiculous skill, but very small. Had the best hands in the 1996 draft group."

This isn't the first time the 5.08, 160 pounder has starred in front of Moose Jaw fans, he led the Western Challenge Cup in scoring this year in the Jaw.

Think Martin St. Louis or Patrick Kane type of a player, who was taken 14th overall in last springs draft, but because of his size he was thought of as a bit of a risky pick. The list TPS compiled from different scouts didn't have him ranked in the first round, but it turns out Moose Jaw's scouting staff was smarter then all of us.
Posted by Dean Millard @ 6:00 AM