Samuelsson Hit; Dirty or Not? [UPDATED] 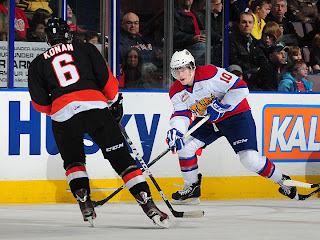 Edmonton Oil Kings forward Henrik Samuelsson was handed a 2-game suspension for a hit delivered Saturday on Red Deer Rebels captain Adam Kambeitz. The result is that the Oil Kings will be without the forward's services for the first two games of their playoff series against the defending WHL champion Kootenay Ice beginning on Friday.

If you haven't seen the hit, the video follows the jump. What we want to know is if you think the hit is dirty or not, worthy of 5 and a game he received on Saturday or not and deserving the suspension handed down on Monday.

UPDATE: I was contacted by the WHL and given explanation on their ruling...

The Rebels play-by-play voice is Cam Moon who will guest on The Pipeline Show on Tuesday to preview the WHL playoffs. At the time, he was surprised by the 5-minute major, we'll find out if the suspension also came as a surprise to him.

Personally, as I said at the time during the Oil Kings broadcast, I think the optics of seeing Samuelsson on his knees after the collision makes it look worse than it was. Samuelsson is moving into Kambeitz as opposed to backwards as in a textbook hip check. To me, it's the force of the collision that pushes Samuelsson onto all fours just as it is that results in Kambeitz sailing over top of the Oil King.

By the Rule Book:

44.1 Clipping - Clipping is the act of throwing the body, from any direction, across or below the knees of an opponent.

An illegal “low hit” is a check that is delivered by a player or goalkeeper who may or may not have both skates on the ice, with his sole intent to check the opponent in the area of his knees. A player may not lower his body position to deliver a check to an opponent’s knees.

44.2 Minor Penalty - A player who commits these fouls will be assessed a minor penalty for “clipping.”

44.3 Major Penalty - If an injury occurs as a result of this “clipping” check, the player must be assessed a major penalty (see 44.5).

44.4 Match Penalty - The Referee, at his discretion, may assess a match penalty if, in his judgment, the player attempted to or deliberately injured his opponent by clipping.

44.5 Game Misconduct Penalty - A game misconduct penalty must be assessed anytime a major penalty is applied for injuring an opponent by clipping.

For me, contact was not below the knees but in the thighs (and it appears to me that Kambeitz may actually have been going upwards before the hit, possibly to try and avoid the collision). There was no injury on the play so really, according to the rule above, no basis for the major being assessed either.

So in my opinion, the correct penalty call (if any is required at all) is a 2 minute minor.

HOWEVER... the WHL contacted me right before our show on Tuesday and made it clear that they have their own ruling on what constitutes "clipping" and I must admit, it's pretty cut and dried:

"a. "Should a player, who is skating in a forward motion, deliberately lower his body in such a manner as to make contact with the opponent below the waist, he shall be assessed a major and a game misconduct for clipping. There will be no option for a minor penalty in this situation."

b. "Should a player, who is skating in a backward motion, deliberately lower his body in such a manner as to make contact with the opponent on or in the knee area, he shall be assessed a minor or a major and a game misconduct for clipping. If the action is clearly a hip check, making contact with the opponent's thigh area or above, this will be permitted as a legal check."

I think this incident clearly falls under the first category and therefore was the correct call on the ice. The suspension itself, we're told it was one game for the hit and one game for being a repeat offender.

It is the third suspension for Samuelsson in the two months since he joined Edmonton in the WHL. The others were both single game banishment for kneeing and charging. I think a person could make a case that Samuelsson is almost being judged on the reputation his father Ulf had earned in the NHL more so than for the "fouls" he himself has committed in the WHL.

Let us know what you think. Email us at pipeup@theteam1260.com, leave a comment below or tweet at us @thepipelineshow
Posted by Guy Flaming @ 12:30 AM