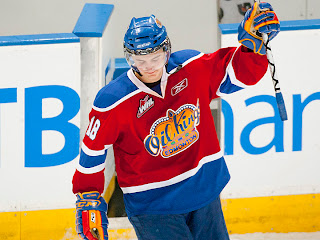 With a goal and an assist last night, Edmonton's Michael St. Croix became the 8th player in the WHL this season to crack the 100-point plateau. It's the first time an Oil King of the modern era has managed to surpass the century mark and the center did it in fine style in front of a nearly sold out Rexall Place.


St. Croix's power play goal at 12:31 of the second period gave the Oil Kings a 3-2 lead and sent a paid attendance of 16, 651 into a frenzy. The noise level went up another notch when it was announced that it was his 100th point of the year and where that ranks in franchise history. 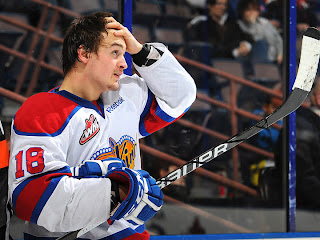 After the game the New York Rangers prospect admitted that it was a relief to finally break 100. He'd gone pointless in the previous two games and although that seems too small to be called a slump, it has been a rarity for St. Croix not to appear on the score sheet in back to back games this season. 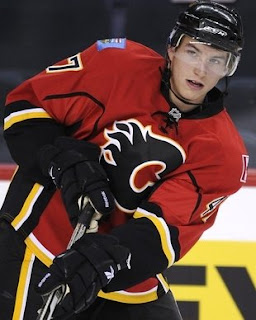 It's uncertain that another player will make it in this year with just 3 or so games remaining. Portland's Sven Bartschi (CGY) is closest with 94 points but he's still enjoying life in the NHL as an emergency recall has him skating with the Flames.

The Winterhawks are off until Wednesday night against Victoria then play the Royals again on Friday before closing out the season at home against Seattle. Can Bartschi put up 6 points against Victoria and Seattle? Absolutely... if he's back from Calgary.

Tentative dates for the start of the WHL playoffs in Edmonton are March 23rd and 25th. Their opponent is still to be determined and will complicate the rest of the opening round.

Brandon will play their "home" games in Winnipeg and that would likely mean a 2-3-2 format if they were the opposition for the Oil Kings. If Edmonton meets Saskatoon, Regina or Kootenay (all still possible with the four teams separated by two points) then I wonder if we would see the traditional 2-2-1-1-1 system.

With just a week left to play in the regular season, there is still a ton left to decide. It's going to be an exciting 8 days.
Posted by Guy Flaming @ 1:04 PM