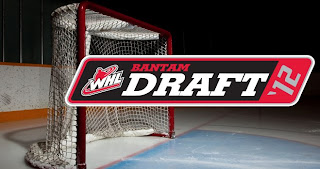 9. Brady Reagan (RD)- Okanagan Hockey Academy 6’2” 183lbs
“He has skill and grit, with loads of upside."
"Has shown ability to overcome adversity”

6. Joe Gatenby (RD) Pursuit of Excellence 5’11” 165
“could be the best skating blue liner in the whole draft.."
"I like him a lot, but he needs to decide if WHL is his path to enhance draft status and for us to take an early chance on him"

4. Ethan Bear (RD) Pursuit of Excellence 5’11” 180lbs
The best dman from Saskatchewan may not be living in the land of the living skies.
" Ethan's from Sask but has been excellent season in BC’s Okanagan."

3. Thomas Lenchyshyn (RD) Eastman Selects 6’1 185lbs
“ tough, competes, the only bantam playing AAA midget in this draft"
"... needs to find a balance between, physical and undisciplined play, when that happens he'll be a star..."

2. Ty Schultz (RD) Burnaby Winter Club 5’11” 160
“ best dman in BC’s lower mainland this year"
"Watch for him if they get to Western Canada Bantam Championships” (They did)