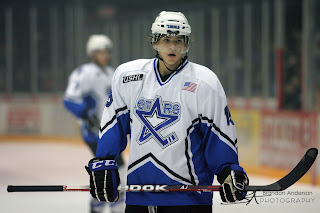 Lincoln Stars 18-year-old rookie Kevin Roy has already established the USHL's tier I single season goal record but now he's within grasping distance of two other notable milestones. With 9 games remaining on the USHL schedule, Roy is closing in on 50 goals and 100 points, achievements not seen since before the league went tier I ten seasons ago.


Kevin Roy has 45 goals and 86 points through 51 games this season with the Stars. He has a 16-point lead over the league's next leading scorer, Russian import Daniil Tarasov of the Indiana Ice. The Quebec product is currently riding a 7-game point streak during which he has earned 13 points. Roy has appeared on Lincoln's score sheet in 21 of the 23 games played in 2012 and has been held pointless just 9 times all year including the first three contests of the season. 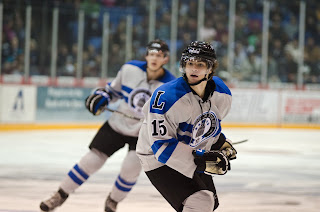 To judge just how significant Roy's numbers are this year, here is a quick recap of the league's leading scorers since the 2002-03 season:

I saw Roy play at the USHL Top Prospects Game in January. After the morning skate before the showcase game, the league asked Roy to get creative for their cameras. You can see me standing behind the glass with league PR mastermind Brian Werger, a fellow member of the Hair Club for Men.

Kevin Roy has a ton of skill. He went undrafted in 2011 because of his size (5'10 and 170 lbs) and because he was still playing prep school in New England. He's committed to Brown University and as I reported in January, has had suitors lined up from the QMJHL as well including Quebec, Saint John and Shawinigan.