~
Last night on The Pipeline Show we tried something new with Bad Ass Trivia, spoke with a former Oiler who is now an executive with the Colorado Avalanche, chatted up two prospects eligible for the 2010 NHL Draft and posed several questions to a Pioneer (some questions more than once).

First with Bad Ass Trivia - we got to thinking recently that we could have another guest each show if we changed trivia by asking a question as we go to a commercial break and take the calls off the air. That way we weren't spending part of our 2 hours/week playing trivia that listeners outside of the Edmonton area can't partake in. We tried it last night and it seemed to work so expect that to continue.

We began last night's edition of TPS with a segment of news and notes from around the hockey prospects world. We updated listeners on the QMJHL, OHL, WHL, USHL, NCAA and AHL. The show also featured a new intro, well at least a new music bed for the intro, let us know what you think of it. Hear that segment HERE.

Our first guest on the show yesterday was supposed to be Patrick Roy but apparently the Quebec Remparts had a team function so we'll have to re-schedule his appearance another week.

Instead, Dean and I had the pleasure of speaking with Jonathan Merrill, a name most fans probably don't recognize yet but definitely will by the time the draft rolls around. Merrill is a 6'3, 200 lb defender with the U18 US National Development team who will join the Michigan Wolverines next year. We talked to Merrill about the program, being a part of the USHL, his future at Michigan and of course his draft year. You can hear that interview with Jon Merrill HERE. 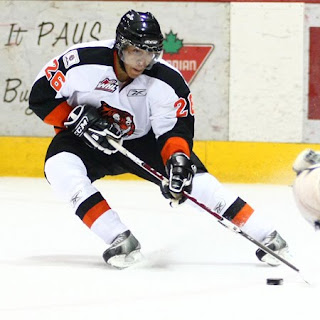 We also talked with another 2010 eligible prospect but this time it was a native Californian playing in Medicine Hat. Emerson Etem is another player probably off the radar of the casual fan but with the Tigers this year he already has 9 goals and 11 points in 13 games as a rookie so he's definitely making a statement. We spoke with the likable forward from Long Beach, CA about his past with the US National Development Program, playing away from home since he's been about 14, and making the move to Canada and the WHL. Hear what Emerson Etem had to say HERE.

The Denver Pioneers are off to a slower than expected start as the formerly #1 ranked program posts a 2-2 record after week 2 of the schedule. Joe Colborne (BOS) is now on the shelf with a broken finger so we had a chance to speak with the former AJHL star about the rough start for his team and also got an update on the injury. Joe also offered up his thoughts on his former team (Camrose) being awarded host status for the 2011 RBC Cup. Hear Colborne's comments HERE.

Another former Kodiak gave us his thoughts about that same topic as Dean had a chance to speak with of the Vancouver Canucks. That was one part of a segment featuring our AJHL Game of the Week and Alumni Player of the Week. Hear that Here. 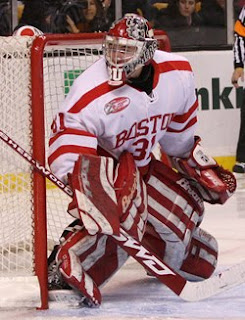 Last but not least, David Oliver, Director of Player Development of the Colorado Avalanche, talked to us about a number of the prospects playing for the Lake Erie Monsters, junior, NCAA or at the NHL level like Ryan O'Reilly, Matt Duchene, Kieran Millan, Kevin Shattenkirk, Colby Cohen, T.J. Galiardi, Brock Bradford and more. Hear what the former Oiler and Michigan Wolverine had to say by clicking HERE.
Posted by Guy Flaming @ 8:34 AM