It's a big weekend for the Alberta Junior Hockey League and for hockey's scouting community as well. Upwards of 100 scouts representing NHL and NCAA clubs are expected to be in attendance in Spruce Grove this weekend and all 16 teams in the AJHL convene in one place for three days worth of games.

And this isn't some exhibition tournament either, these are all regular season games so it's a chance for scouts to view all of these teams in action (all will play 2 games) without the travel that regularly might hinder them from viewing some.

Earlier this fall I asked a few scout contacts if there are any really notable players on the radar from the AJHL this year. Last year it was Dylan Olsen (CHI - 1st round) and the year prior it was Joe Colborne (BOS - 1st round).

"There is no Olsen or Colborne this year," said one scout, "But I'll no more after the Showcase."

That's basically been the sentiment I've gotten from everyone I've posed that question to. There might not be the marquee name out there just yet but there will definitely be players who catch the eye of a NCAA team or a NHL scout if they put together a solid weekend.

The Edmonton Journal's Cam Tait had a nice feature on Sherwood Park netminder Patrick Terriss a couple of days ago. He's an example of a player hoping to get noticed.

Many players in the event already have NCAA commitments in place and a pair are property of a NHL club after being drafted last June.

Here are a few reasons why I personally will be hoping to watch a little from all of the teams this weekend.

- Leading scorer Lucas Isley has 10 points in 6 games. He's headed to Western Michigan next season.
- The Pontiacs have a couple of American Import players which has me interested from a journalistic point of view. How does a defenceman like West Virginia native Donnie Harris end up in Northern Alberta? How about back up netminder Adam Janecyk who hails from Michigan?
- Bonnyville takes on Brooks (Fri) and Olds (Sat). 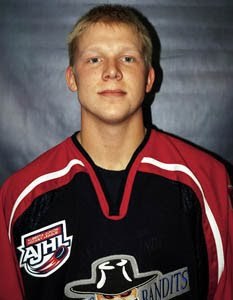 - The Bandits have scored 38 goals, most in the AJHL.
- Forward Riley Simpson doesn't turn 16 until the end of November. The 15-year-old already has 6 points in 8 games. He doesn't have a NCAA commitment yet so you know he'll be a guy the college schools will be watching.
- Netminder Rob Gunderson (pictured) was invited to the 2009 WJAC camp. He's currently sporting a 7-0 record with a ridiculously good .942 save percentage. Gunderson is headed to Alaska-Anchorage next year.
- Brooks plays Bonnyville (Fri) and Grande Prairie (Sat).

- John Dunbar leads the team in scoring. He also was one of the AJHL invites to the Canada West WJAC camp. The Calgary native does not have ties to a NCAA program yet.
- With 10 points, Jared Wynia has already established a new career season. Interestingly, he's listed as "female" on his bio page. Insert joke here.
- The Canucks netminder might have the best NASCAR name of all-time: Dusty Nickle.
- Calgary plays Sherwood Park (Thur) and Drayton Valley (Fri)

- The Royals have lost three games in overtime so they're a hair away from being a .500 club.
- Jeff Collett is tied for 8th overall in league scoring, he has 12 points.
- Rookie John Lidget turns 16 in a couple of weeks . He's second in team scoring and is also looking for NCAA attention.
- The royals square off against Drumheller (Fri) and Drayton Valley (Sat)

- Boris Rybalka's club has 10 points, same as the Canucks but they have one more loss.
- Leading scorer Clayton Jardine is committed to Merrimack where former Kodiak Karl Stollery and Jesse Todd currently play.
- Jardine and Defenceman Ben Gallacher were both participants at the Canada West WJAC camp.
- Erik Slemp is also headed to the NCAA ranks as he's slated to join Alsaka-Fairbanks next season.
- Camrose will play St. Albert (Thur) and Fort McMurray (Sat).

- 19-year-old Lee Reimer has 14 points in 8 games. He's uncommitted to a NCAA program.
- rookie goalie Sam Brittain is the 17-year-old starter for the Eagles.
- The eagles have scored 32 goals, second best in the South Division.
_Canmore will play Grande Prairie (Fri) and Drumheller (Sat)

- The last place Thunder are led by Daniel Cobb, and import forward from Illinois.
- There are a number of Quebec born import players on the roster including rookie Marc-Andre Carre and Philippe St. Laurent.
- The Thunder will play the Calgary teams with the Canucks (Fri) and Royals (Sat).

- 15 rookies listed on the roster, has to be one of the youngest and most inexperienced teams in the AJHL.
- Defenceman Justin Tateson has verbally agreed to join Alaska-Faribanks.
- Todd Callaghan has 57 PIM in 8 games.
- The Dragons will face the Calgary Royals (Fri) and Canmore (Sat).

- Rookie Import Tyler Helton hails from Colorado Springs, CO USA.
- 6'4 blueliner Brad Stebner has a commitment to play for Michigan Tech. beginning next season. He was also at the WJAC tryouts for Canada West.
- The Barons will play Olds (Fri) and Camrose (Sat) 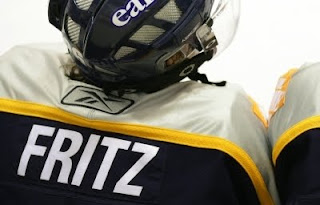 - The defending champs are off to a slow start. They have allowed a league high 44 goals against.
- Dennis Rix leads the AJHL in scoring with 20 points and his 10 goals are the most by one player as well.
- Tanner Fritz and Zahn Raubenheimer both have ties to the NCAA. Fritz, a WJAC invite, will join the Ohio State Buckeyes next season while Raubenheimer is headed to Nebraska-Omaha.
- Tyler Sheldrake, a 20-year-old import from Ontario, leads the AJHL with 103 PIM after just 9 games. He has 41 minutes in penalties over the next player on the list.
- The Storm play Canmore (Fri) and Brooks (Sat).

- The Bobcats are led by rookies Daniel Gayle, Kyle Harris and import Chad Hohmann.
- Cooper Limb originally hails from Salt Lake City, Utah.
- No members of the Bobcats have committed to a NCAA program.
- The Bobcats will play Okotoks (Fri) and St. Albert (Sat). 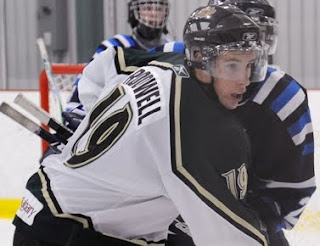 - Forwards Rodger Craig and Derek Rodwell were invited to try out at the Canada West WJAC camp held in Okotoks. Craig is a 6'5 future member of the Cornell Big Red. Rodwell was drafted by the New Jersey Devils in the 5th round last June and will join the University of North Dakota in 2010-11.
- Quinn Sproule is headed to Alaska-Anchorage while goalie Sean Cahill will play for Alaska-Fairbanks.
- The Oilers will play Spruce Grove (Thur) and Lloydminster (Sat)

- Matt Tinordi is headed to R.P.I. next year.
- Netminder Marc Boulanger is slated to join UMass-Lowell for teh fall of 2010-11. He's only appeared in 1 of the 8 games Olds has played so far.
- Olds plays Ft. Mac (Fri) and Bonnyville (Sat).

- Have not been beaten in regulation time, the Crusaders have scored 34 times after 7 games.
- Leading scorer Cody Kunyk has 16 points in 7 contests, he's headed for Alaska-Fairbanks next season.
- Chris Kallal shares the team scoring lead with 16 points but he has yet to establish a NCAA program.
- Goaltender Matt Esposito played two seasons in the WHL with Everett and Chilliwack.
- The Crusaders play the Showcase opener against Calgary Canucks (Thur) and the final game against Spruce Grove (Sat).

- The Saints are the league's highest scoring team with 38 goals for and have only allowed 9 goals against which is also the best in the AJHL.
- Nate Fleming is the AJHL Player of the Week and leads the team with 13 points.
- Brett Cameron was invited to take aprt n the Canada West WJAC camp. he's committed to play for Alaska-Anchorage.
- Defenceman Ryan Kerr is a recent addition. Kerr has played the last 4 years in the WHL with Prince George, Lethbridge and Portland.
- Spruce Grove will take on Okotoks (Thur) and Sherwood Park (Sat).

- Daniel Carr has 13 points and the lead in team scoring. He's headed to Union College in 2010-11. Carr was one of 10 AJHL players at the recent Canada West tryout.
- Bryce Williamson is undrafted and uncommitted to NCAA but is a name that has come up to me a couple of different times. He has 12 points.
- The Steel will square off against Camrose (Thur) and Lloydminster (Sat).

Email ThisBlogThis!Share to TwitterShare to FacebookShare to Pinterest
Labels: AJHL

Hey, this is completely off-topic but you guys are the best of reporting Junior hockey.

When the heck did Philippe Cornet get traded to Rouyn-Noranda?

He was officially traded at the QMJHL draft this past off-season but even he admits he knew it was coming as part of a deadline deal made between Rouyn-Nornada and Rimouski back in January.

The Q is notorious for deadline deals where one team gets good stuff from the other, but in the offseason so the first team can still be loaded up for the playoffs, etc.

Thanks for the compliment DG.