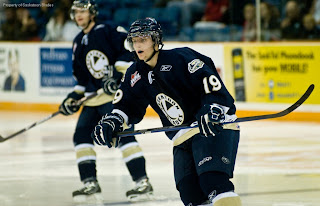 The Vancouver Giants have just announced that they have acquired Edmonton Oilers prospect Milan Kytnar from the Saskatoon Blades. In exchange for the overage Euro, Saskatoon receives a 3rd round pick in the 2010 Bantam draft.

Kytnar, born May 19, 1989 is a 6'1'' 180 pound centre, who will add depth to the Giants top 6 group of forwards says Bonner "Milan is a proven goal scorer in this league, and with the offensive players we have lost to graduation, he will be a good fit in organization this season"

Kytnar scored 25 goals and had 64 points for the Blades in 65 games last season, he was also plus 15. This season, he has played only 3 games and recorded 1 assist with the Blades.

Kytnar will arrive in Vancouver in time to practise with the Giants tomorrow.

The native of Slovakia has represented his country at the World Junior Championship where he played a key role. He was originally a 5th round pick of the Edmonton Oilers in the 2007 draft and was signed by the club this past off-season. He started his WHL career with the Kelowna Rockets and now joins his third team in as many seasons.

Here is the release from Saskatoon's end of things.
Posted by Guy Flaming @ 2:39 PM