Fantasy Prospect Pick Up Of The Week 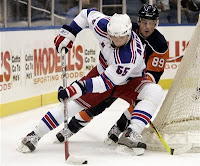 After watching Artem Anisimov go pointless with a minus 1 rating through his first two games with the Rangers, the dynamic Russian forward has broken out in his last 4 with 4 points, including his first career NHL goal sunday vs. Anaheim.

On Monday, the 21 year old recorded his first multi point game, picking up 2 assists as the blue shirts smoked the leafs 7-2.

Anisimov was one of the players TPS put on it’s Calder trophy watch list, and his 37 goals, 81 points in 80 games last year in Hartford is the reason why. Keep in mind it was the first season of hockey in north america for the 2nd round pick of 2006.

Anisimov has seen playing time with skilled guys like Marion Gaborik and agitators like Sean Avery, as well as some power play time, and might now just be hitting his stride.

Artem Anisimov is my fantasy prospect pick up of the week.
Posted by Dean Millard @ 6:34 AM