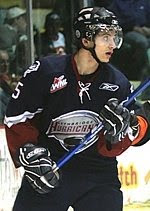 For the second season in a row, Swiss defenceman Luca Sbisa has been cut from his NHL team. The official release from the Anaheim Ducks is HERE.

Sbisa was sent back to the WHL by the Philadelphia Flyers last year where he collected 15 points in 18 games. Philly's 1st round selection in the 2008 draft played 39 games in the NHL last season and has appeared in 8 games for the Ducks this year.

Interestingly the release does not state exactly where Sbisa is being sent but it would appear the options are fairly limited. Isn't he headed back to Lethbridge again? Having been drafted out of the WHL, Sbisa cannot play in the AHL until he is 20-years-old and he doesn't reach that age until the end of January.

The next question is, what do the rebuilding Hurricanes do? Do they instantly try and move him sooner as opposed to later like they did with Kyle Beach when sent back to them by Chicago earlier this fall? Do they wait longer and try and build a bidding war before the WHL trade deadline on January 10th? Do they keep him and use him as a tool in their rebuilding process with their young players?
Posted by Guy Flaming @ 3:26 PM

Is he an overager? We could really use him here in Brandon.

We'd have to give up one of Urbom and Rajala to take him. I don't think it'd be worth it. Now, Carter Ashton on the other hand...

Just an update to this, the 'Canes already have 2 Euros on their roster, so if they will have to make one move for sure.

I've also heard, that Anaheim might try and move Sbisa to Europe rather than put him back in the WHL.

Due to the CHL/NHL agreement and the value that Sbisa has (either as a member of the Hurricanes or as trade asset to another team), I can't see Lethbridge allowing him to go to Europe.

That said, the Hurricanes will have to make a deal to bring Sbisa in because, like you mentioned, they already have 2 Import players already on their roster. One of Sbisa, Valchar or Kolppanen will not be a member of the Hurricanes by the end of the week, and likely earlier then that.

great stuff Kevin, thanks for the update.

The Broncos could use the services of Sbisa as we don't have any Euros, but would have to make room for another 20 year old. We really need another vet d-man.

Given that Valchar's been all but invisible after scoring a pair in his first game, my gut feeling is that he's on the way out to make room for Sbisa. Valchar also being a 20 year old, removing him from the equation could give the Canes room to add a gritty veteran forward that they really need (I'm thinking a guy like Mike Wuchterl was for us two seasons ago).

Not missing a thing, Dean.

Sbisa isn't an over-ager. But one of the other Import players on Lethbridge's roster is: Valchar.

As being the double-shot of an over-ager and an Import player, Valchar's value is low, especially when coupled with his mediocre play. Lethbridge might choose to just outright release him.