College hockey south of the border is officially underway for the 2009-10 season, except for 6 of the 12 ECAC programs (who don't get going until Halloween) and a smattering of other teams. A few surprises on opening weekend including a CCHA team getting swept by an ECAC squad, a CIS team going 3-0 against Hockey East and last year's hottest club out of the gate gets shot down early.

Here is how the Top 20 Poll looked heading into the weekend (with first place votes in brackets):

Let's start with Ohio State getting it handed to them by Quinnipiac. According to the coach's poll, the Buck
eyes are considered the fourth best club in CCHA this year but they were stunned by the Bobcats (#8 ranked in ECAC) to the tune of 4-2 and 3-1 scores. Quinnipiac was led by senior Eric Lampe who made good on his name and lit the lamp 3 times. Fellow Bobcat senior Brandon Wong also came away from the series with 4 points. It doesn't get any easier for Ohio State next weekend as they welcome the #1 ranked Denver Pioneers to town. 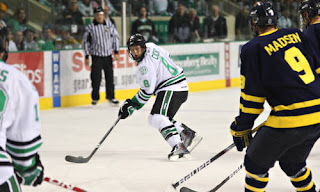 North Dakota hosted Merrimack on opening weekend and were able to sweep past the potentially underrated Warriors by 5-2 and 3-2 scores. I have had a few scouts tell me that they think Merrimack is becoming a better hockey program that will deserve their attention more and more over the next few years. This weekend the Warriors dropped both games on the road in Grand Forks and only managed a combined 35 shots against Brad Eidsness (BUF) in the Sioux net while UND peppered Merrimack's duo for 75 shots. Junior Chris Barton had 3 of Merrimack's 4 goals. For North Dakota, freshman Mike Cichy (MTL) and senior Chay Genoway had 3 points each to lead the home side. 14 of 19 UND skaters registered at least a single point over the two games.

The Michigan State Spartans had a year to forget last season but they've gotten the 2009-10 campaign started on a positive note. The Spartans beat Clarkson by 6-1 and 4-3 scores to sweep their opening series. Clarkson is ranked 11th of 12 ECAC teams so that should be kept in mind but still, the wins have to at least be confidence boosters for the MSU players. Three Spartans came away with 4 points including freshman Derek Grant (OTT); the former BCHL forward had 2 goals and 2 helpers. Corey Tropp (BUF), who ended last year in disgrace after his part in the Steven Kampfer fiasco, also had 4 points and will look to make a new start for himself in his junior year. Highly regarded MSU defenceman Jeff Petry (EDM) notched 3 assists and 21-year-old freshman blueliner Zach Josepher also had 4 points. Canadian Matt Beca was the top point getter for Clarkson as he scored twice.

It was the battle of the Serratores as brother/coaches Frank and Tom faced each other with their respective teams. Air Force won their first 14 games last year and were the hottest team in NCCA but they were unable to repeat that success this season after getting swept by Bemidji State this weekend. The Beavers got 5 points from junior Matt Read and beat the Falcons 3-1 and 7-3. No surprise that Jacques Lamoureux's 3 points led Air Force in scoring with a goal and two assists but the fact that goalie Andrew Volkening was chased from the net after allowing 6 goals on 17 shots... that's a stunner. Bemidji's quest for a return to the Frozen Four continues a couple weekends from now with a series against Northern Michigan. Air Force tries to get back on track against Alabama-Huntsville. 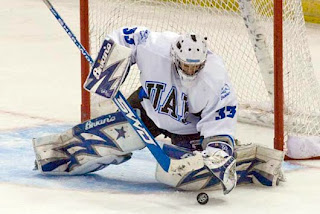 Speaking of the UAH Chargers, they pulled off one of the biggest upsets of the opening weekend when they surprised the Fighting Irish of Notre Dame with a 3-2 win on Friday night. Netminder Cameron Talbot made 39 saves in the victory and UAH got goals from three different players. Talbot faced 51 shots the next night and was able to stop 48 of them but that wasn't enough to hold back the Irish for a second straight victory. UAH only managed 14 shots during Saturday's match, not nearly enough offence to have a hope of beating back a team they surprised the night before. The Irish look to put the shocking split with UAH behind them as they welcome the Providence Friars next weekend. 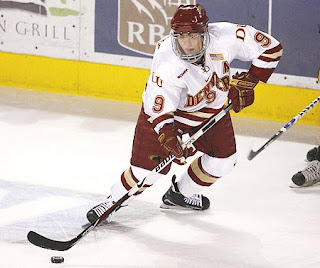 #1 ranked Denver had their hands full with 2009 Frozen Four participant Vermont and the resultant split will surely impact next week's top 20. The Pioneers took Friday's tilt 5-4 thanks to a late goal from Joe Colborne (BOS). It was Colborne's second of the period and Denver's third as they erased a 4-2 Vermont lead in that final frame. The Caramounts struck back the next night posting a 6-4 win over Denver who played freshman Adam Murray instead of incumbent starter Marc Cheverie who played the night before. Rhett Rakhshani (NYI) collected 4 assists while Colborne and Tyler Ruegsegger (TOR) both scored twice. For Vermont, senior Brayden Irwin sits atop team scoring with 4 points.

The #3 ranked Michigan Wolverines went to Alaska and were promptly shutout by the Nanooks in the opening game of the Kendall Hockey Classic. Sophomore goalie Scott Greenham, who draws the unenviable task of filling Chad Johnson's (NYR) departed shoes, delivered the goose egg stopping all 23 shots he faced. The Nanooks won the event by beating Mercyhurst 6-1 on Saturday. Anchorage, meanwhile, also beat Mercyhurst but then failed to complete the Alaska sweep as they dropped Saturday's tilt against Michigan by a lopsided 6-1 score. Freshman Chris Brown (PHX) is off to a good start for the Wolverines and has 3 points while Hobey hopeful Louie Caporusso (OTT) was held pointless.

Justin Fontaine and Jack Connolly both had 3 points in Duluth'4-3 win over Lake Superior in the Superior Showcase. Dylan Olsen (CHI) recorded his first NCAA point as the former Camrose Kodiak made his college debut with the Bulldogs. 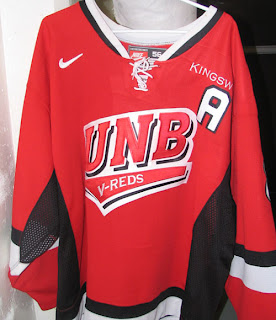 One final NCAA note of interest, especially for fans of Canadian University Hockey... the current defending champion V-Reds of New Brunswick concluded an extremely successful invasion of Hockey East over the weekend. UNB began their NCAA tour last weekend with a 3-2 win over Massachusetts then followed that up with a 3-2 overtime victory against Vermont. Friday night the V-Reds completed the sweep by handing Providence a 6-3 loss.

Every year there are several CIS teams that venture across the border to take part in some exhibition games against NCAA competition and most of the time the American clubs win handily. While both teams use the games as fine tuning for their regular seasons and dress partial rosters or rotate goalies, it's an interesting experiment in comparing the two levels of hockey. I've written much on this topic in the past (like Here, here, here and here) but suffice to say that I've always felt there is a small number of CIS programs that could compete with the best of the NCAA and New Brunswick is one such school.

Some will argue that the wins this year came against relatively weak Hockey East schools but remember, Vermont was a Frozen Four finalist last year and just beat top ranked Denver this weekend. In their game it was New Brunswick that rotated goalies while the Catamounts played Rob Madore for the entire match.

New Brunswick will also play Maine later this season as the Black Bears will host UNB on January 2nd... a mid-season game with both teams in mid-season form and no excuses available for either side.

More on UNB...They lost to the Portland Pirates (AHL) 4-2 on September 30th which I think is a very good showing for them.