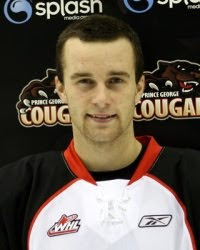 Each year The Pipeline Show is excited to bring you entries to our blog written by players in their draft year and 2009-10 is no exception. So far we've heard from Edmonton Oil Kings defenceman Mark Pysyk and Prince George Cougars forward Brett Connolly. Today it's back to P.G. that we go for another entry from the reigning WHL Rookie of the Year...

The Ivan Hlinka tournament (in August) was a great experience for me; I mean to play on a team that had so many good players was something else. Everyone came together and accepted the roles they were given, which eventually led to us winning gold. For myself, going down in the first game with a hip injury really took a toll on me. It was so hard watching the guys play and just wanting to be out there. I did everything I could to heal fast and try and get into that gold medal game. Our trainer Brownie really helped me heal up quick and get me at least ready to play a few shifts in the final. 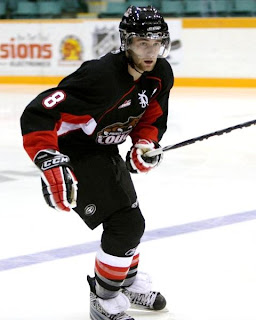 I remember in the third game against the Czech Republic we had to win by at least 8 goals and I wanted to help out as much as I could because if we didn't win by that much we would have to drive all the way back to Piestany. I did everything I could trying to convince doctor Beavis and Brownie to put me in the lineup, but they didn't budge! Fortunately for our team we managed to run the score up on the Czech team and got to stay in Czech for the final game. It was a total team effort and everyone chipped in and scored some goals. The next day was a day off which was good for the healing of my hip.

I practically lived in Brownies hotel room getting the treatments I needed to be able to be a part of the gold medal game. The night before the final game day I was not to sure about my hip because I was really nervous about how I was going to feel in the morning. My leg felt just okay before going to bed, but when I woke up it felt a lot better. We got the last few treatments in and I was all ready to go. I was still sore but there was nothing keeping me out of the gold medal game; Even if I only played a few shifts, I wanted to do as much as I could. 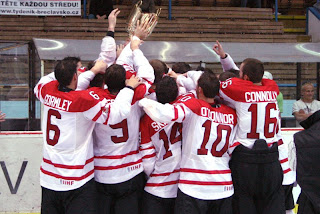 We saved our best game for last. We came out of the gates flying and Russia did not know what hit them. Another total team effort which led to the gold medal. We ran the score up on a fast skilled Russian team that just couldn't play with us. Everyone bought in all tournament, which led to us being a dominant hockey club. Celebrating with the guys after the win was another great experience. To celebrate that with guys you've just met and became close with is special and to be part of a winning tradition in Canada is unbelievable. We celebrated until 1 in the morning where we then took off to Vienna to catch our flight home. It was one long plane ride home.

Once I got home I focused on the Prince George Cougars. I thought I had healed my hip until training camp where I went down with the same injury and missed the whole exhibition schedule. I managed to get my hip healed up (or what I thought was healed up) for the season opener against Spokane. I played 6 games and in my 7th game the injury came back again. I immediately left the game against Lethbridge and have been on crutches and back in Physio for the last week. I'm not too sure how long this is going to sideline me but I have to get this looked after so it never happens again. Its the third time so its gotta be dealt with sooner rather than later. 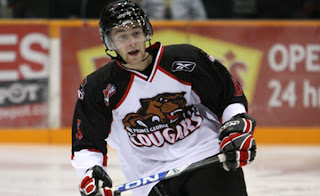 I got out to a pretty good start with 4 goals and 2 assists but the team's start has been just okay. We are sitting at 2 - 8 in our first 10 games. We have a lot of key guys injured like Garrett Thiessen, Dallas Jackson, and Marek Viedensky. Once we get those guys back and myself we will have a lot more depth. Our team in Prince George is young and promising. We have a lot of great kids here who want to be here and are Cougars at heart. Things will turn around for us this year but they don't happen overnight and are going to take some time. Our team right know is young and we have lots of guys who haven't played in the league before who just need to get some confidence and know we can play with anyone in our conference. The guys just have to stay positive and keep working hard everyday and the wins will come.

To get a letter this year in only my 2nd year is special. To be chosen by my peers as a leader is kinda neat. Wearing a letter was one of my goals for this year and is something I've always wanted to do. This year I am going to work hard everyday and bring a positive attitude to the team and lead by example. I want to help out the younger guys. Even though I'm 17 I can help out guys like Jesse Forsberg who is going to be a high draft pick next year (2011), and even guys older than me that need help as well.

Brett Connolly is ranked 5th by TSN's Bob McKenzie and is a consensus 1st round pick by every scouting agency who has released a list for the 2010 draft. The 6'2 winger had 60 points last season with the Cougars as a 16-year-old . Prince George selected Connolly with their 1st round pick (10th overall) in the 2007 Bantam Draft.