Who improved the most? You tell us by voting on our poll questions here. A handful of teams made big time upgrades but most teams decided that what they had was good enough. Or at least good enough for them not to pay reported extremely high prices. 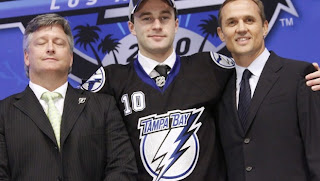 The top two teams in each conference didn't give away anyone on their rosters and still added to the arsenal, or in the Tri City Americans case, hope they have added. The WHL's top club traded for the rights to Brett Connolly from Prince George. He's in Tampa right now and the Lightning have until the NHL's trade deadline to send him back. For now Connolly occupies a roster spot in Tri. It's a 5th round pick for now but could turn into a 1st and 2nd down the road.

How great would it be for Connolly to get returned to Tri-City and face Prince George in the first round??? It could easily happen, we just need Steve Yzerman to play along. The Americans are very good without him, good enough that a lot of people are still picking them to win it all without any improvements. From the Cougars point of view, we spoke with G.M. Dallas Thompson Tuesday night and you can hear it here. 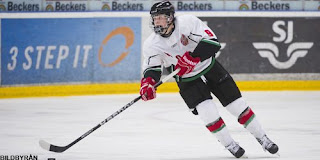 As for the Oil Kings Bob Green brought in top 6 forward Henrik Samuelsson without giving anything up, for the second time this season. Samuelsson like defenceman Cody Corbett earlier this year was a listed player that decided Edmonton was the right fit for him. Both are 2012 draft eligible and like Corbett adjusted from Minnesota high school hockey, Samuelsson had been playing at various levels for Modo in Sweden. The power forward joined Guy and myself Tuesday night and you can hear his thoughts about why the time was right and what he expects to do in the WHL.

An interesting point that Guy brought up Tuesday, because Samuelsson will be drafted out of the CHL this year, his only two options for the next two seasons will be the NHL or WHL, which sets up well for the Oil Kings down the road.

Some of the teams chasing Tri City and Edmonton added, but most didn't. Medicine Hat, Saskatoon and Calgary did little or nothing at the deadline, while Kamloops, Kelowna and Vancouver subtracted or stood still. However there were a few GM's thinking this could be their year. 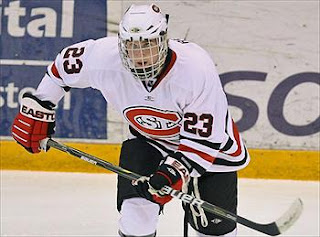 Portland gave up a second round pick to Edmonton for Cam Reid (above) who was playing NCAA at St. Cloud, it gave the Oil Kings something to play with but nothing developed. Portland saved their biggest splash for the very end, picking up scoring forward Marcel Noebels in the final minutes. The Hawks sent 2 first round picks and a player back to Seattle for Noebels. It beefs up an already offensive team and it's an interesting move by the Thunderbirds. They trade their forward but keep Calvin Pickard, who most thought would be dealt. Keeping PIckard still gives them a chance to make the playoffs, and post season money is starting to factor into more trades. Prince George did something similar with Drew Owsley and both Pickard and Owsley will be key for whichever team makes the big dance. 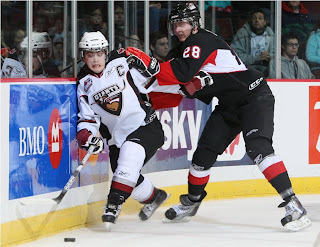 Regina came late to the party but still went home with a beauty. The Pats made a late offer that Prince George couldn't resist and picked up Slovakian giant dman Martin Marincin. Going back to PG is Swedish rear guard Ricard Blidstrand along with a first and 2nd round picks. The Pats also get mid to late round picks. It's a nice move by the Pats who get a big tough mobile dman who will go nice with Brandon Davidson and Regina's already stingy defence.

Not to be outdone down the highway in Moose Jaw the Warriors added some impressive veterans and playoff experience getting former Vancouver captain James Henry from the Giants as well as all purpose forward Cam Braes from Lethbridge. The Warriors gave up a total of: 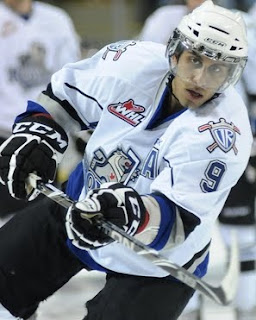 Kelly McCrimmon did his damage a day before the deadline grabbing point producer Kevin Sundher from Victoria. Unlike most of the other deals, Brandon had to part with Jordan Fransoo and Dakota Conroy, two good players as well as a first round pick in the 2012 draft. Brandon now has one of the most lethal offences in the league, it'll just be a matter of keeping pucks out of their net. Most thought the Wheat Kings were going to grab a goaltender like Pickard or Owsley. Guy and I spoke with Rod Pedersen and Sam Costentino about the deadline moves and they both pointed to Brandon as being the most improved. You can hear both of their opinions here.
Posted by Dean Millard @ 11:09 PM