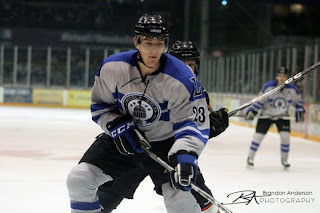 The USHL Top Prospects Game featured a number of the top draft eligible players in the league with the exception of those from the US-NTDP and a couple key players unfortunately sidelined by injury. The vast majority of the skaters who were on hand in Muskegon, Michigan this past Tuesday were of the smallish, skilled variety with a couple of exceptions.

One was an 18-year-old behemoth patrolling the blueline for Team West named Mike McKee. The nearly 6'5, 232 lb rearguard definitely stuck out from the group because of his size but also because of his passport; McKee is Canadian. 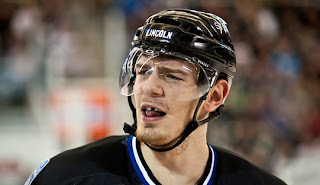 I spoke with McKee after the morning practice on the day of the showcase game. He towered above me looking every bit the imposing player he is on the ice; even his grin seemed large and somewhat menacing with ten stitches sewn into the top lip and a front tooth already forced into early retirement.

McKee hails from Newmarket, Ontario but insists that he has never had his eyes on the OHL which is why the big blueliner has made his way south to the United States Hockey League. He played prep school at Kent in Connecticut, wasn't taken in the 2010 NHL Draft even though he'd been thought of highly enough the previous fall to have taken part in the NHL's Research and Development Camp.

"It's always been a dream of mine to play college hockey and the USHL is probably the best fit for me right now," he told me.

He's not the first Canadian to pick the USHL over the various tier 1 junior leagues in Canada where players can develop and still retain their NCAA eligibility. I asked what it was about the American loop that convinced him it would be better than playing in Ontario or venturing west to Alberta or British Columbia.

"I thought that Lincoln was a great fit for me - coach Johnson and coach McGroarty really helped me out and have worked with me a lot and they kind of drew me to the USHL and I'm happy there with them," said McKee who clearly doesn't regret a thing. "It's the best decision that I've made so far."

The arena, as it was described to me, is apparently something that has to be seen to be believed. Located on the town's fair grounds in what may or may not have been originally meant for housing livestock, the Ice Box is now the home of the hockey team and its dedicated fanbase.

"Lincoln has I think for the last seven or eight years, maybe eight for eight, they've got the best attendance record each season," said McKee, "The place is packed every night and win or lose all the fans are there supporting you so it's an unreal place to play. I really like it."

Just a couple of weeks ago the Ice Box was the scene of an epic clash between bitter foes. The visiting Omaha Lancers were in town and by the end of the night they had escaped with two points but paid the price physically in the process. It was a fight filled affair including a line brawl where all six players on the ice from each team got involved. Lancers goalie Alex Lyon took part in the Top Prospects Game sporting one of the biggest shiners I have ever seen in person.

"Well Omaha is a huge rivalry [for Lincoln] in Nebraska," McKee smiled as he recounted the night's events, "I had a fight earlier in that game that kind of got things going a little bit and then things escalated after one shift in the second; we had a line brawl and both goalies went at it.

"It was good for the fans and that's what happens when tension gets pretty high between Omaha and us," McKee smiled.

As you would expect from a man-child his size, McKee loves the physical side of the game but according to head coach Chad Johnson, it would be a mistake to consider him as a simple thug.

"He's not a one dimensional player," the coach told me, "Teams definitely know when he's out there but he also makes a lot of plays. We put him out there in a lot of crucial situations as far as power play. If we're up a goal or down a goal, he's the guy that I'm putting out there." 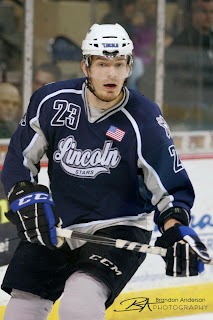 After 35 games this year McKee has 1 goal and 12 points but is second in the USHL with 100 penalty minutes. I was curious as to which version of McKee I would see in the Top Prospects Game but I was pleased to get a glimpse of the skill and ability that coach Johnson referenced as well as the toughness that I expected. While he didn't register a point in the game, twice he had offensive chances including one drive to the net that saw him beat a defender one on one and nearly score on a deke in close.

"Finish hits, make some plays," McKee shrugged when I asked him to describe himself as a player. "For the most part this year I have led the league in PIMs but that's not the entire part of my game. It's definitely a big part but I can also play the game. I have some skills and I can skate. I think I'm pretty decent and not just a fighter."

He's also apparently the kind of guy that both teammates and coaches love to have around.

"Guys kind of gravitate to him in the locker room, they're drawn to him," described coach Johnson, "He's a big kid, he's very skilled, he's a guy that goes out and plays hard every night; He just understands the game."

As for college, McKee's plans changed over the last couple of years when the coach that recruited him left his program for the NHL. Like fellow Wookie stunt double Jamie Oleksiak (DAL), McKee had planned on being a Hockey East Husky.

"I was originally going to Northeastern," he explained, "I love the school there and I thought that coach [Greg] Cronin was my kind of coach but he left. Now he's in Toronto and all the rest of the coaches are gone now too."

Northeastern's loss is Western Michigan's gain as the Broncos are now to be his collegiate destination and McKee suggests that it was almost first come, first serve.

"When I de-committed from Northeastern they were kind of the first school to jump on me and its a pretty nice fit I think," said McKee who will benefit from the tutelage of one of hockey's most respected teachers. "Andy Murray... it seems like another situation like I have in Lincoln, all really nice guys and I think they can help me a lot."

Murray took over the Broncos this past summer and has an extensive coaching résumé that includes jobs at just about every level of the game from the NHL to high school with a lot of success along the way. McKee says he isn't certain whether he'll be a Bronco in 2012-13 or the following season. 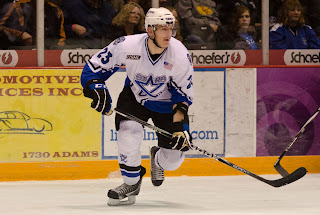 "We're still talking about next year or the year after but I'm just happy to go whenever they can have me," he said, "I think it will be an honor to play under Andy Murray and a great opportunity for me to play for a guy with such a great record."

NHL Central Scouting ranked McKee 144th on their mid-term North American skaters list meaning, according to them, the big defender may not even get chosen this June. That would be a mistake according to the bench boss in Lincoln.

"He's the type of guy that isn't satisfied with just playing his next four years of college hockey," said the coach, "He's a complete player and I think he's going to be a pro."