Is There a Canadian Crisis In The Crease? 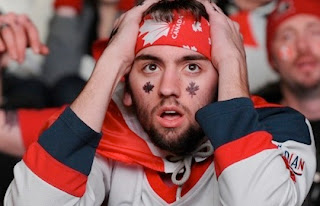 "I've said it before but why is it Canada never has a goalie that steals the show? We are horrible at picking goalies for this team."

That's a quote from a friend of mine in a recent email. He is amazingly patriotic and passionate, but obviously making a blanket statement like that shows he's more tin man then scarecrow after meeting with the Wizard.

His memory is shorter then it would take anyone riding the stick Tiger Williams style to get planted in the WHL.

That Canada hasn't had a goaltender steal the show in recent years is true, but never is bit much.


In the last 3 gold medal/semi-final games the following goaltenders have seen action for Canada.

The only goalie not to either be replaced or replace his partner in a gold medal game has been Olivier Roy in 2011, and he was the starter when that tournament began. It's no coincidence that Canada has settled for Silver twice and will play for Bronze this year. Now for some countries that wouldn't be settling, it would be celebrating but not Canada, especially when the tournament was held in Canada twice and just across the border a 3rd time in that span. Where are the Canadian goaltenders my friend (we'll call him Scoot) has forgotten about? The ones that were named the tournaments top tender or set records or made incredible gold medal saving stops? I don't know but Canada better find a few soon. Neither Wedgewood nor Visentin can return next year so there will be fresh blood soaking up the tournament. One name to watch for is Oil King netminder Laurent Brossoit. He's tied for 2nd in wins with 23, 5th in gaa at 2.50, 6th in save per centage at .914 and no pipe man has played more minutes. Is there crisis? No, but they have top be concerned.

As for the past, here's a few Canadian goaltending accomplishments:

-Roberto Luongo nearly stole the gold in 1999. Russia more then doubled Canada in shots peppering and finally beating him on the 40th shot in overtime.

-Marc Andre Fleury stood on his head in 2003 and almost willed Canada to a gold medal, but like Luongo his heroics weren't enough. Like Luongo though he was named to the All Star team then was drafted first overall by the Pittsburgh Penguins.

-Carey Price stellar shoot out stops in 2007 are legendary. While the States did pump some by him, Price was all world as Canada won gold for a 3rd straight year.

-Since the tournament began in 1977, a goaltender from the Great White North has been named to the all star team 10 times. More then any other country. Russia is the next closest at 6, followed but by the U.S.A at 5. The record for most shut outs in a tournament is held by Canadian Justin Pogge who had 3 in Vancouver where he led Canada to what some thought was an unexpected gold medal.

Any time Canada loses people will point to players that didn't make the team or were even invited. That game was being played today by thousands of people. What if Tyler Bunz made the team? What if Sam Brittain was healthy? What if chips and dip were healthy for you? As a fan, "Scoot" included, you have the right to cheer when they win, boo when they lose and jump on and off the bandwagon as many times as you want. But don't let the facts get in the way of a good rant.
Posted by Dean Millard @ 6:00 AM

There is a very good article titled "The State of Canadian Hockey Goaltending Development" at http://ingoalmag.com/technique/the-state-of-canadian-hockey-goaltending-development/ .

They talk specifically about Finland and Sweden focusing attention on developing goalies. We do not have that in Canada. Every team/organization has their own goalie coach, if they even have one. I know of a Bantam AA team last year where the goalies were basically targets, they had no goalie coach.

My son has worked with the same high quality goalie coach for the past 4 years: Dustin Schwartz. This summer he was in Dustin's specialized summer camp and continued it by attending Vimy Ridge School where Dustin teaches in the hockey academy.

You mentioned Laurent Brossoit as a possible goalie to watch. He's coached by Dustin, so it wouldn't surprise me to see him invited to camp for next years Team Canada. The program Dustin teaches is very different from other programs we know of.

I guess the point I'm trying to make is that other countries are focusing on their goaltender instruction from much earlier ages than Canada does, with a coordinated program. Here it's really up to individual parents (like me) and coaches to ensure the kids get the best fundamental training they can. The programs that are taught are often different from year-to-year based on the goalie coach used. Following a single high-quality program like the one Dustin teaches from young goalies through junior would go a long way to ensuring we always have high-quality goaltenders in Canada.