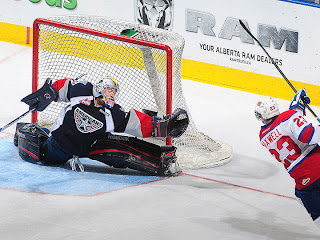 A week ago it was the top two teams in the WHL and the #1 ranked team in Canada vs. the #9 team. Wednesday night at Rexall revealed how great an Edmonton/Tri City playoff series would be. Playoff starved hockey fans in Edmonton will eat it up.


Tri City started hard but once the Kings held them off for a bit the tide started turning. Edmonton outshot the Americans 19-8 and led 1-0 after T.J. Foster notched his 19th on the season and closed to within 2 points of his career high of 54. Edmonton should have been up more but Tri City tender Ty Rimmer was sensational making a couple of stops he had no right to.

The visitors slipped in the tying goal just 1:15 into the sandwich frame thanks to Laurent Brossoit missing the Patrick Holland shot along the ice. Not a great goal, and there were a few like that on both sides, but the pipemen more then made up for it with brilliant and timely saves.

Tri City grabbed a one goal lead, but it was short lived as Griffin Reinhart pumped in his 10th and 11th goals for a 3-2 40 minute lead.

From there the third had everything. Huge stretch pad saves, point blank blocker stops and desperation robbery by the goaltenders. Deadly power play passing and some funny bounces that ended up in goals. It would have been nice if the overtime winning goal by Brendan Shinnimin was a hilite reel special, as there were goals like that during the game, but it was a long shot that fooled Brossoit who was looking through bodies in front of him.

A terrific game that had a nice atmosphere. Hopefully we see a lot of that this spring in Edmonton.
Posted by Dean Millard @ 12:08 AM