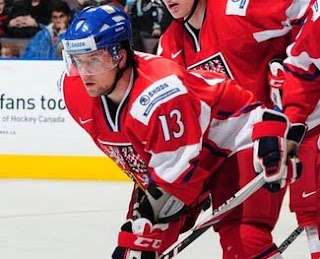 "It would be really nice to beat the champions."

The Czech Republic will have the opportunity to do just that tonight when they square off against the mighty Russians in WJC action. It's hard to imagine anyone choosing to play Russia but that is what one Czech player told me after his team lost to Finland on Saturday.

Defenceman Marek Hrbas spent the 2010-11 season as a member of the WHL's Edmonton Oil Kings. It was a pleasant return to Rexall Place this week as a member of Team Czech Republic because it provided him a chance to catch up with old familiar places and faces.

"It was nice to be back to see all the people I know from last year," Hrbas told me on Saturday evening, "I had a chance to see my billets."

The Oil Kings average about 4500-5000 fans for a regular season home game and that's a bit higher this year than it was last season before Hrbas was traded to Kamloops. He's noticed a slight difference in Rexall during the WJC than when he wore #13 for the Oil Kings.

"It's even better to play in front of 17,000 people instead of last year with 5000 people," he laughed. It wasn't the only difference in Edmonton from what he remembered, "The weather surprised me a bit; I thought it was going to be colder."

Edmonton has enjoyed an extremely mild winter thus far with day time temperatures hovering at or even north of the freezing point - a rarity for December and January around here.

With the WJC here, the Oil Kings are are on the road so there are no former teammates to meet up with except one; fellow blueliner Mark Pysyk who is playing for Canada.

"I talked to him after our game against Canada," said Hrbas, "it was nice, he's a good guy." 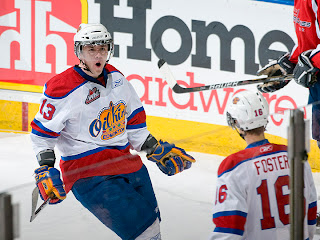 Then we got down to business. The game between Russia and Sweden was still on when we spoke and I asked him about heading down to Calgary for the medal round and facing one of the two powerful hockey nations.

"We've got to get more ready than we were for [Finland]," said Hrbas, "Obviously it's going to be very hard to play against Sweden or Russia but we'll try very hard to get a win."

Picking between those two countries to face as your opponent might be like asking which you'd prefer; a punch in the face or a kick in the junk - neither is likely going to be a great experience. Still, the Czech blueliner called his shot.

"Uh.... probably Russia because, well... they're probably [equal] but probably Russia," he said after weighing his options for a minute or so. I asked him if there was any particular reason why he chose the Russians.

"It would be really nice to beat the defending champions."

Indeed it would and the Czech Republic, as heavy underdogs, have a chance to do just that tonight in Calgary.