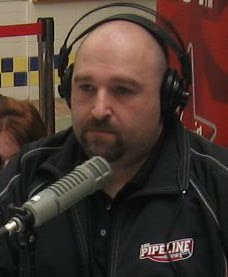 It's my turn to take a prediction crack at Canada's final WJC roster. Dean's list came out this morning, you can see that by scrolling down a few inches on the page.

With a record-high 41 players invited to camp this year, there really are a lot of spots up for grabs and a lot to be decided between now and Boxing Day. There are only three returning players and while usually those guys are locks to make the team, some might suggest that this year that isn't the case for one of them.

Thankfully, Kevin Prendergast and Don Hay gave hints yesterday as to what types of players we should expect to see on the final roster.


"I think compared to last year's team it will be a little bit younger because of the players still in the NHL," said head scout Kevin Prendergast, "The skill level is probably going to be a little bit bigger."

"The defence is going to be very skilled, players that can move the puck or skate the puck out," Prendergast described, "Offensively, we're going to have a good mix. We'll be young up front but I think with some of the size guys we have brought in to be bottom six forwards we'll have a physical element to our game and hopefully from the young guys up front we'll get a lot of goals from them."

Based on those comments... here's my final team.

Mark Visentin - Niagar (OHL): The incumbent gets the starting job but like we've seen the last couple of years, he doesn't hold it.

Tyler Bunz - Medicine Hat (WHL): the most consistent goalie this year of the four invitees, the Tigers goalie eventually takes over the top job. 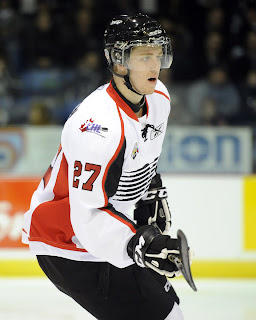 Brandon Gormley - Moncton (QMJHL): The third time is the charm for the Phoenix prospect.
Dougie Hamilton - Niagara (OHL): Probably a lock for a top-4 role. (right)
Ryan Murphy - Kitchener (OHL): Makes my team as the 7th d-man at even strength but the key cog on the power play.
Ryan Murray - Everett (WHL): If he's healthy he's possibly on the top pairing.
Jamie Oleksiak - Saginaw (OHL): Very mobile considering his size and the size will be what puts him on the team. The fact that he chose Canada over USA may not factor into it at all... or it might.
Alex Petrovic - Red Deer (WHL): One of the more well rounded invitees, he fits Hay's description of a 200 ft. player to a tee.
Mark Pysyk - Edmonton (WHL): One of several two-way invitees but possibly the best defensively among that group. A quiet leader and the second oldest player in camp.

Injury replacement: Joe Morrow, Portland (WHL): It came down to Oleksiak and Morrow for me and 6'7 won out. I'm a big Morrow fan but have been told that Hay may not be. 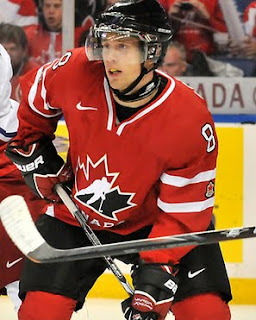 Brett Bulmer - Kelowna (WHL): A big forward that fits in with Prendergast's description of their expected 4th line players. His head coach in Ryan Huska.
Phillip Danault - Victoriavile (QMJHL): An all-hustle player that can kill penalties but isn't limited to a checking role either.
Brendan Gallagher - Vancouver (WHL): An offensive leader in the WHL who may be a guy asked to take on a different role for Canada but Hay is his coach and that familiarity will do him well.
Freddie Hamilton - Niagara (OHL): Steady and reliable if not flashy, he's the fourth IceDog on my team.
Quinton Howden - Moose Jaw (WHL): An offensive guy with the Warriors but might he be one of the players with size expected to fit into a bottom six role? I think he can do both jobs.
Jonathan Huberdeau - Saint John (QMJHL): It's not complicated; if he's healthy, he's on the top line.
Mark McNeil - Prince Albert (WHL): Won his invite at the Subway Super Series playing with Stone, why move away from that? Has size and capable in his own end even if just average offensively this year. A bottom six role as described by Prendergast.
Ty Rattie - Portland (WHL): A natural winger so he won't play out of position plus as a natural scorer he's piling up the points in the WHL.
Mark Scheifele - Barrie (OHL): This Ryan Johansen of the 2011 draft continues down that same path and is a top 6 center for Canada this year.
Jaden Schwartz - Colorado College (WCHA): I said it last year and I'll say it again, he could lead Canada in scoring and should be a fixture of the top power play unit. (above/left)
Ryan Spooner - Kingston (OHL) - Personally, I have no feel for this player but colleagues and convinced me that he'll figure into the picture highly despite being somewhat of a "head case" and "problem child" (their words, not mine).
Mark Stone - Brandon (WHL): A big body that currently leads the WHL in scoring could play any role and is a lock for the final roster.
Ryan Strome - Niagara (OHL): "younger but more skilled"? who better fits that description than Strome does?

Injury replacement: Michael Bournival, Shawinigan (QMJHL): It came down to Bournival and Bulmer and the NHL experience plus Ryan Huska connection put the Kelowna forward on my team.

There you have it so now... let me have it. Voice your opinions in the comments section below.
Posted by Guy Flaming @ 2:15 PM

Oleksiak has been average in Saginaw this year. Hockey Canada has better options at this point in time than Oleksiak who shouldn't make this team based on draft pedigree or size. He's too raw for my liking. Joe Morrow would be a better fit or Cody Ceci