And then there were 41 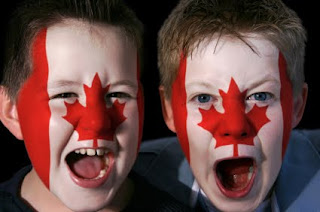 Canada announced it's training camp roster this morning. Guy had his say, now it's my turn. Tomorrow we will provide what we think will be the final team based on the 41 players invited to the camp in Calgary starting December 11th. The official list can be found here. 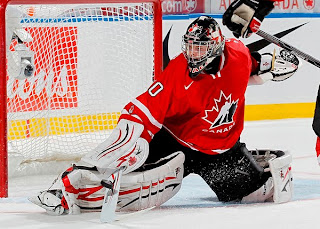 The 4 goaltenders invited don't surprise me a lot. I think Bunz is the starter on Boxing day, and if he doesn't shine in the camp Mark Visentin could become the first goalie not to make the team after playing an important role the year before. As for others who could have earned invites, Ty Rimmer in Tri City, Calvin Pickard in Seattle were mentioned, but I think HC had these 4 in pen for a while.

14 blue liners were invited and with Ryan Murphy suffering from a concussion HC has to make sure they have someone who can run the power play as effectively as Murphy in case he can't play. That could be Nathan Beaulieu from Saint John or Jerome Gauithier-Leduc of Rimouski who leads all blue liners in QMJHL scoring with 37 points and is second only to Dougie Hamilton across the CHL. Two 2012 draft eligible rearguards were invited as Cody Ceci and Matt Dumba will try out, and for me Ceci has the better chance at making the grade. 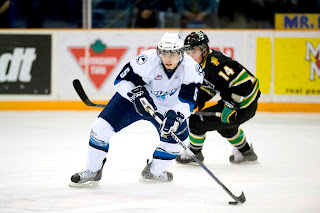 As for who didn't get the call, I thought Duncan Siemens (above) or Joel Edmundson from the west might get invited, especially after the physical ErikGudbranson stuck in the NHL, but it seems to me anyway that this version of Hockey Canada will be built on strong skaters rather than punishers.

Having said that there are a couple of big boys on the back end. Hamilton is 6.04... Jamie Oleksiak is 6.6 and a half and Alex Petrovic is almost 6.04. For me Siemens does both well. He skates like the wind and dishes out big checks and I think people make to big of a deal about the play in his own end. He would be on my team. He also doesn't lack confidence which is important during the tough sledding medal round games of this tournament. There isn't a returning rear guard on the list, but Brandon Gormley would have made last year's team if he didn't get hurt, and should be on the top shut down pairing this time around.

As for the forward group, despite losing the services of Brett Connolly, Ryan Nugent-Hopkins, Sean Couturier, Ryan Johansen and Devante Smith-Pelly to the NHL there is still more talent then last year's club in my opinion. 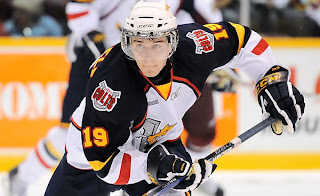 Jonathan Huberdeau, Mark Stone, Mark Scheifle (above), Brendan Gallagher and Ryan Strome are all top notch point producers on their CHL team, and one has to wonder if we would be talking about Canada as defending champions had Colorado College sniper Jaden Schwartz not suffered a broken ankle during last year's tournament. Schwartz could end up leading this team in points and will be relied on heavily along with Quinton Howden, the only other returning forward. Guys like Brett Bulmer, Mark McNeil and Brad Ross will make the club on their ability to play physical and on the edge, without going over it.

None of the highly touted underaged players made the grade as Hunter Shinkaruk in Medicine Hat, Sean Monahan in Ottawa and Nathan McKinnon of Halifax will have to wait for next year's tournament.
Posted by Dean Millard @ 5:36 PM