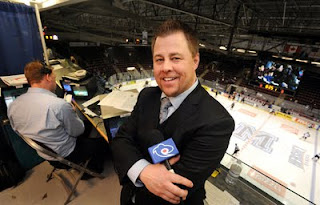 Tuesday night we welcomed in our weekly CHL insider Sam Cosentino from Sportsnet. FYI for all you Sam fans, he will be in studio with us Saturday morning at 10 am mst to answer any questions you might have. As for Tuesday night we covered everything from what underaged should be invited to Hockey Canada's camp to a perceived bias in the OHL to how many goalies should be invited when Hockey Canada reveals it's list of invitees on Monday.


The first thing we threw at Sam was our poll question, which you can vote on here. Which of Nathan McKinnon of the Halifax Mooseheads, Sean Monahan of the Ottawa 67's or Hunter Shinkaruk of the Medicine Hat Tigers. Do you invite them all? Do you leave all 3 off the list" 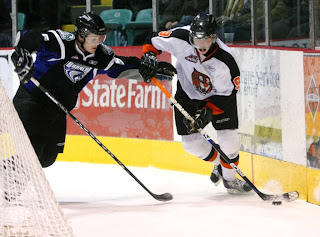 "I could make a case for all 3 guys for different reasons. I guess if you give me the caveat that the person has to be a contributor to this year's team...I'd probably say Shinkaruk" Sam told us. "I love Monahan, I'm just so worried, when you get that type of injury, who really knows. McKinnon no doubt will be a go to guy next year. I'd probably have a different feeling if Monahan was healthy.

Speaking of Monahan's injury, what is it? According to Don Campbell of the Ottawa Citizen, it's a concussion.

Monahan isn't the only OHL star on the shelf right now. Sarnia forward Nail Yakupov was banged up on the weekend.

"Upper body, who knows and I think we all know where that's going unfortunately." Cosentino added "As soon as a coach says concussion, a whole bunch of caveats go along with that. Baseline testing, cleared medically, liability. All those buzzwords start to come into play. All for good reason and all long overdue in the last 3-4-5 years."

Sticking in the OHL we discussed suspensions and lack there of. London's Ryan Rupert received just 5 games for a stick swing incident, while the player he hit, Nick Cousins got 2 games??? Meanwhile Max Domi, who also plays for the Knights didn't get a second of a suspension for his recent head shot. I told Sam I recently spoke to some people in Ontario who believe the Knights get breaks from the league office.

"I think it's more coincidence then anything. I look at Nick Cousins #1, there is some history there and he is well known to officials. When that goal is scored, hands in the air yelling an screaming and he makes a bee line for Ryan Rupert. Does that mean that you should all of a sudden be subject to whatever happens to you? No." Cosentino added that he felt Rupert slashed Cousins in the pants (which in my mind shouldn't make it any less punishable) and could have received 3 more games then the 5 he received.

"Now when I look at the Domi play, guy comes off the boards with his head dead down staring into the middle of the ice. And I said it last year, we can't always download the responsibility on the victim, but in some cases the victim has to take responsibility for his actions. "

As for Canada's last line of the defence at the World Junior Championship, it's not looking great right now. Recently Kevin Prendergast stated the goaltending hasn't been up to snuff this year, and Cosentino had a suggestion for Hockey Canada.

"I would bring 6 goalies to camp and you know what you guys convinced me 2 weeks ago that (Ty) Rimmer might be one of those guys, and maybe you bring in JP Anderson who I dismissed (a while ago) and I really feel that way. You bring (Tyler) Bunz, and you bring (Scott) Wedgewood and you bring (Mark) Visentin and you say alright boys, here you go, everyone has an equal shot. To me not one goaltender has put his head way above and beyond the other."

Sam also touched on the top divisions across the CHL. What are they? Click here to listen to the entire interview as well as Sam's thoughts on whether or not Quebec trades Louis Domingue.
Posted by Dean Millard @ 9:10 PM