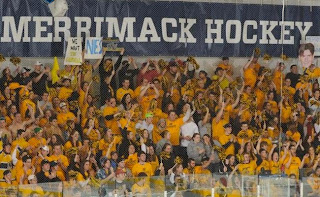 Don't look know but after a weekend that saw many of the top ranked teams suffer defeat, there should be a new program at the top of the NCAA poll on Monday. There is only one team in the country with a zero in their loss column and unless the poll makers have completely lost their minds, Merrimack will be ranked #1 for the first time in their history.

The Golden Gophers split their weekend series in Wisconsin losing 3-1 on Friday to the unranked Badgers. Boston College just got by Northeastern on Friday but were blown out 5-0 at home on Sunday by arch-rival Boston University. The Tigers were beaten by Denver and both Michigan and Western Michigan were swept by their opponents. 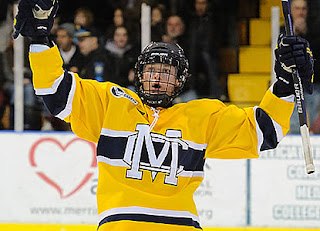 The #6 ranked team a week ago was Merrimack who promptly went out and edged the BU Terriers in overtime to improve to a near perfect 8-0-1. The only blemish on their record is a 1-1 tie with Northeastern a couple of weeks ago.

One could make the argument that the Warriors haven't played against top caliber opposition yet and I'll give that notion some merit. I think Merrimack deserves some recognition for having a perfect 5-0 road record though and at least even the "weak" competition they have faced thus far is still coming from Hockey East programs which is to suggest, no pushovers. 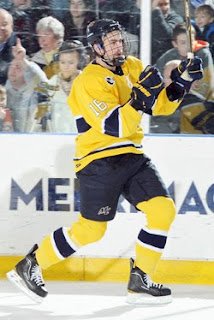 The Warriors lost some talent from last year's impressive team that I declared as my dark horse. Stephane Da Costa (OTT), Chris Barton and Joe Cucci were the top three scorers in 2010-11 and have all moved on. Still, Merrimack's roster is dotted with notables including a number with ties to the Alberta Junior Hockey League.

Forward Jesse Todd (left) and defenceman Karl Stollery (high above) are both former Camrose Kodiaks who are among the top 4 scorers on the team right now. Freshman Clayton Jardine is another Camrose recruit but he's yet to make a dent on the score sheet.

Other AJHL alums include seniors Elliot Sheen and Carter Madsen, both former Okotoks Oilers, and one time Bonnyville Pontiac Shawn Bates. Overall, there are 12 Canadians on the Merrimack roster. 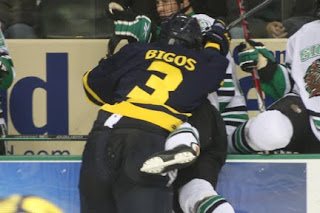 Edmonton fans may remember that Todd was an invite to the summer camp of the NHL Oilers in 2010 where he joined 2009 draftee Kyle Bigos, a native Californian who played his junior hockey in Canada with the BCHL's Vernon Vipers. There are three other American born players on the roster who also came to the program via the BCHL so clearly, there is a very strong Canadian influence on Merrimack right now.

The team's MVP to this point is probably netminder Joe Cannata, a 6th round pick by the Vancouver Canucks in 2009. The senior is sporting a .940 sv% and 1.48 GAA after 8 games, top 3 in the NCAA for both categories.

Can the Warriors keep up the pace? The schedule gets tougher with dates against the resurgent Providence Friars but it's not far fetched to think Merrimack could get to the Christmas break, that's 6 games, without suffering more than a single loss.

With an average of 3.22 goals for and just 1.33 against (tops in the NCAA), Merrimack is getting it done at both ends of the ice. The fact that the team can win on the road, unlike a couple of years ago, is also a major reason for the program's success.

Credit has to go to head coach Mark Dennehy who has taken the Warriors from Hockey East fodder and turned them into a National threat. The team reached the National tournament last spring and appears set on doing more than just that in 2012.

At this point, you have to like their chances.