The Curse of 2012 Continues 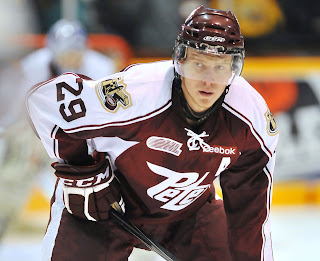 It's been a draft year like no other and not exactly on the good side for some of the top prospects for 2012. In past years we've seen the odd player go down with an injury or 2 (Brett Connolly, Jared Cowen) but this year you could field a whole line with some of the highly touted players Alex Galchenyuk, Nail Yakupov, Martin Frk, Ryan Murray and Morgan Rielly just to name 5.

Now you can add Peterborough Pete Defenceman Slater Koekkoek to the list.


According to Mike Morreale of NHL.COM It's a dislocated shoulder but thankfully it shouldn't keep the solid rear guard out for the season like some of his draft colleagues. It's a tough blow for Koekkoek and the Petes who were both on their way to rebound seasons. Peterborough sits 4th in the conference, a far cry from 9th place where they finished a season ago. The Mountain, Ontario product is just 2 goals and 5 points shy of his totals from last year. He was considered a top ten pick by ISS.

Neate Sager from Buzzing the Net has this tidbit.

"In an odd coincidence, this is the third season in a row the Petes have had a top draft prospect go down with a significant injury. Ottawa Senators first-round pick Matt Puempel had to cut his season short last year to have hip surgery. Two seasons ago, current Nashville Predators prospect and Petes captain Austin Watson was limited to 10 games in the second half of the season due to an ankle injury."

Koekkoek could be out 6 weeks, but more details will be known when an MRI is done. We spoke to our CHL Insider Sam Cosentino Wednesday night about what it means for the player and the team. Sam feels it could actually help him as when he returns to the Petes line up he'll be fresh and ready for a playoff run.

"You're gonna look at a guy who's got fresh legs, who's anxious to get back who's gonna be doing whatever he can do to make up for lost time." Cosentino added the Petes will be hurt more as Koekkoek logs mega minutes on the back end.

You can hear the rest of Sam's segment here.
Posted by Dean Millard @ 11:20 PM

It is becoming clear that there are a few teams in the NHL that not only have a poor record of drafting talent, but also developing talent. The 'detroit model' has been touted across the interwebs as one that the Oilers should be mirroring to build a winner, but many teams seem to be so desperate to win now, that they risk the player's development by rushing them into the league before they are ready, and hoping that they are okay.

Are you aware of any prospect who has intentionally tried to avoid going to a specific team? I'm thinking of taking a night off while a team's scout or GM is at the game, or throwing an interview at the combine, but I expect there are other ways they might do so.

I don't mean to suggest that any of this years draftees would injure themselves to avoid Columbus or the Islanders, but... fact is stranger than fiction, no?