Each Day until September 15th TPS will take a look at one team from the East and one team from the West and spotlight a few rookies to watch for this season. Since Dean began his half of the job with the Vancouver Canucks I thought it only fitting to look at the other finalist, the defending Stanley Cup champion Boston Bruins. 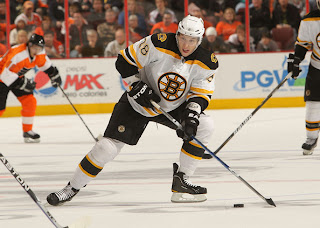 With the retirement of Mark Recchi, Michael Ryder leaving for Dallas and the news that Marc Savard's career is in jeopardy, youth may be served in Beantown. Surely sophomore Tyler Seguin will play a bigger role but who stands to be the club's top rookie this year?

I think former QMJHL standout Jordan Caron (above) has to lead the list of potential candidates doesn't he? He began the 2010-11 year with the big club and played 23 games before being sent down to the farm. At 6'3 and over 200 lbs, Caron's got NHL size and can play a checking role which might be his way onto the Bruins roster as a 4th liner.

I keep waiting for Zach Hamill to break through but I'm starting to wonder if he's just one of those guys who was stellar as a junior but a half step behind for the NHL. The center scored 32 goals and 93 points in his draft year with the WHL's Everett Silvertips but dropped almost 20 points the next year. After scoring 13 and 14 goals during his first two AHL seasons he only managed 9 last year. My own expectations were high for a guy taken 8th overall in 2007 and time might be running out. 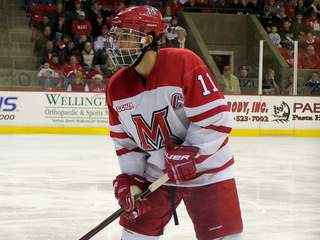 Want a real darkhorse? How about college scoring machine Carter Camper? Frequent readers here and listeners to TPS will know that I was all over NHL teams to sign Camper who totaled 183 points in 156 NCAA games with the Miami RedHawks. Yes he's small at 5'9 and 170 lbs but he's obviously got an offensive gift. Maybe he's destined to be an AHL superstar but maybe, just maybe, he's a guy who can surprise everyone and have NHL success too.