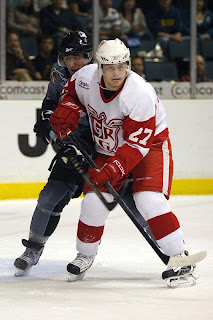 No team is more patient with their youngsters then Detroit. Darren Helm and Jakub Kindl are examples of players who would have made the roster on most teams but with the Wings they season in the AHL.

This year Tomas Tatar (left) will make a claim for a roster spot after a 24 goal 57 point year in Grand Rapids. The 2nd round pick from 2009 plays the game at a high level with a great desire to score every time he touches the puck, and celebrate every lamp lighter like it's his last.

Corey Emmerton saw ice time in 2 games last year and will certainly see that increase this year, but mostly as spot duty. 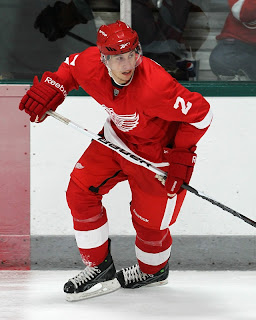 Most people think blueliner Brendan Smith (right) is the most NHL ready prospect in the system. The former Wisconsin Badger does a lot of things really well, like putting up points. He had 12 goals in this first AHL season after scoring 15 goals and 52 points in his final NCAA season with the Badgers. He also amassed 124 penalty minutes with Grand Rapids.

If there's an injury in net...again...then Thomas McCollum could benefit. The 2009 first rounder split time between the AHL and ECHL last season and will use his large frame to try and fill the net in Detroit this season.
Posted by Dean Millard @ 6:00 AM