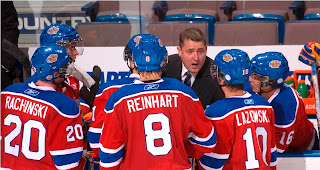 It wasn't the record that they were looking for but the Edmonton Oil Kings have probably seen all they needed to through a 2-3 exhibition schedule to get ready for the 2011-12 season. With 9 players away for NHL rookie camps for half of the pre-season and a couple of others on the shelf, the brass got to see several top youngsters in plenty of action for the last ten days.

All that's left are the cuts.


A few weeks back I made my pre-camp predictions of what I expect the opening night roster to look like. For the most part, I still agree with the 25 names I listed. There might be a name or two different in the end, but no really huge surprises.

Who has impressed me? Both Curtis Lazar and Mason Geertsen (above) have been as advertised and now that they've taken the cage off their helmets, there really is no way to tell that they are 16-year-old rookies. Certainly not by their play on the ice.

Mark Reners was outstanding early on during the inter-squad game and the pre-season tournament but I'm told he has come back down to earth since then. He didn't do much in Lacombe on Friday to get me excited. 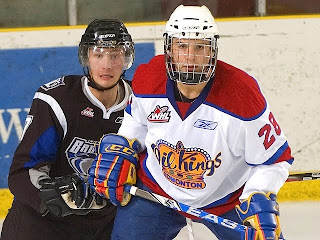 I have liked what I have seen and heard about Mitch Moroz this fall. Here's a guy who should have been on the team last year (above) but fell short. This year he's apparently dropped any sense of entitlement a 2nd round pick might have and instead has earned his way onto the roster with his physical play. That's exactly what the Oil Kings needed him to do because at 6'1 and 195 lbs, he's one of their biggest forwards. He's also switched from #28 to #29... if you're a believer in that sort of stuff.

I have also really gotten to enjoy watching Cole Benson. I'm a bit of a sucker for the little guys who overcome and beat the expectations at this level and I think Benson can be one of those guys. He hustles every shift and he's got skills to go with his defensive awareness. 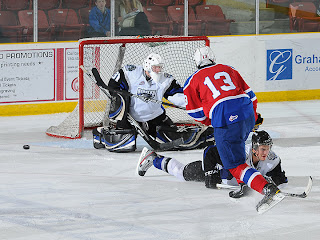 I get the sense that Benson is in competition with one other rookie for a final roster spot, that being big #13, Brandon Baddock from Vermilion. At 6'2, Baddock is the biggest Oil Kings forward so the door is certainly open for him. He skates well, plays physical too but if it came down to one or the other, my personal preference would be for Benson.

That said, I wonder if a veteran might lose his spot. With both Travis Ewanyk (EDM) and David Stephens sidelined at the moment, maybe Bob Green has a bit more time to make a decision. However, are guys like Colton Stephenson and Rhett Rachinski locks for the opening night roster? I'm not so sure.

On the back end, there is no longer much doubt who the top 7 will be; Mark Pysyk (BUF), Keegan Lowe (CAR), Griffin Reinhart (2012), Martin Gernat (EDM), Mason Geertsen (2013), Ashton Sautner (2012) and Ryan Dech. That leaves Braeden "Bunny" Laroque on the outside looking in, but that's according to me and not the team.

There might still be question marks in net, simply because of injuries. Laurent Brossoit didn't go to Penticton with the rest of the Calgary Flames prospects because of a groin issue. No word on how serious it is but it kept him out of the Red/White game so it's been with him off and on for much of training camp. 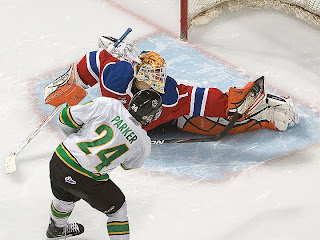 20-year-old Jon Groenheyde (above) has been excellent in camp and the the exhibition games but earlier this week he took a puck in the throat during practice. Edmonton only dressed one goalie (Tristan Jerry) in Lacombe for their final pre-season tilt because the vet was in the stands and Brossoit isn't back yet from Calgary.

Groenheyde is basically fine, I spoke with him in Lacombe and he described how a high Rhett Rachinski slap shot caught him by surprise. According to the netminder, he wasn't able to breath for about 30 seconds as his larynx seized up after taking the puck. Groenheyde said he instantly ripped off his mask and bolted towards the bench waving frantically for trainer Brian Cheeseman and shortly after he was able to start breathing again. The goalie was whisked away via ambulance to the University of Alberta hospital to get checked out and stayed there for about 8 hours before being released. He'll be re-evaluated early next week, more for precautionary reasons, but I'm told he should be good to go for Edmonton's season opener on the 25th in Red Deer.

So my previous predictions only need a slight alteration. With injuries to Ewanyk and Stephens up front, that means Edmonton can keep the other 13 I predicted plus Baddock. When guys start coming back to the line up, then Bob Green will have to make a couple decisions. 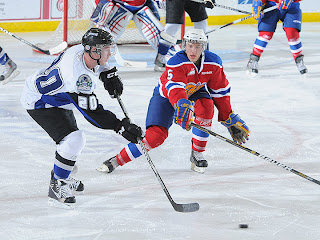 The defence and netminders are what I expected although I think that I might move Sautner (above) up to the #6 D-man spot ahead of Dech.

- I'm just guessing but I won't be surprised to see Groenheyde get the start on the 25th and wouldn't be stunned if Tristan Jarry is dressed as the back up. With so much riding on Brossoit's shoulders this year I don't see any reason to risk playing him until he is 100% ready to go. Having not played in much preseason action or in the NHL rookie tournament, he might be a bit rusty too. 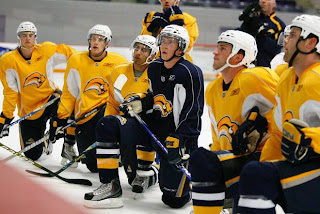 - With the Buffalo Sabres headed to Europe to start the year there's a good chance that captain Mark Pysyk (in blue) is back next week and in time for the start of the season. That would be great for the Oil Kings although I hope Pysyk gets to play in a couple of the five NHL exhibition games Buffalo has before they leave for Europe.

- Tough start to the season schedule for Edmonton with 8 of their first 10 games on the road. Plus the team will make stops in both Medicine Hat and Kootenay, both are traditionally difficult buildings for Edmonton. Also on the road trip are dates in Moose Jaw and Saskatoon.

- With the 2012 World Junior Championship being played in both Edmonton and Calgary, the Oil Kings and the Hitmen will be on the road. To make up for it, Edmonton has an 11-game home stand from November 25th to December 18th.

- The 5 clubs in the U.S. Division only come to Edmonton every second season so circle those dates on the calendar this year: Portland is here on October 21st, Everett October 26th, Seattle November 5th, Spokane November 29th and the Tri-City Americans invade Rexall on January 25th.

- The Victoria Royals make their first ever appearance in Edmonton on December 14th.

- And finally, in case you hadn't heard, the Oil Kings have dropped ticket prices this year. We've been on them since 2007-08 for what we felt were unfair costs on seats so it's only fair to give the team credit for this decision. Seats that used to be $29 are now $20 and the $25 seats are now $17. (Walk up prices are a couple bucks more). Last October I did a cross Canada comparison for junior hockey ticket prices and it didn't work out so good for Edmonton, but these new costs are now right in line with the other NHL markets.