The rookie contribution from the Vancouver Canucks was minimal at best last season. 9 first year players contributed 9 points on a team that came up a game short of a Stanley Cup. Chris Tanev played the most games at 29, which makes him no longer a rookie this season. Cody Hodgson is the Canucks top prospect and suited up for 12 playoff games last spring and will make a push for a center spot this year. He'll be battling fellow middle man Jordan Schroeder for a roster spot. Both guys put up similar number in Manitoba last year and could be destined for more polishing time in the AHL. 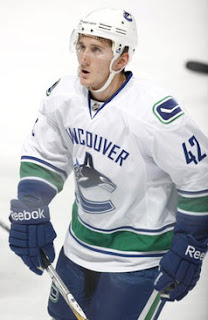 One guy to watch for is Bill Sweatt whom the Canucks signed as a free agent after 4 years with Colorado College. Sweatt finished with 19 goals and 46 points, second in Moose scoring behind now departed Sergei Shirokov. He has speed to burn and is 22 years old. Versatility will be the key for Sweatt. Can he play both wings, and will he be gritty enough to play in the Canucks bottom 6?

Canuck fans might also want to keep an eye on Mike Duco, the player Vancouver acquired for Shirokov. The 24-year-old put up 20 goals and 126 PIM with Rochester last year.
Posted by Dean Millard @ 6:00 AM