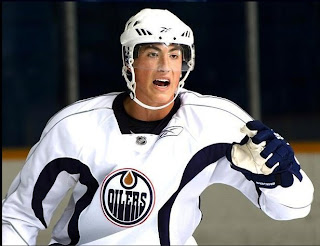 
Hesketh began the year as property of the Fargo Force but was dealt to the Chicago Steel before he'd played a game in North Dakota. After going pointless through 22 games in the Windy City, the Steel have shipped Hesketh off to the Sioux City Musketeers. Details of the Dec. 29th trade were not made clear in the release.

I can't imagine that 2010-11 has exactly worked out the way Hesketh had wanted it to. The 3rd round pick of the Edmonton Oilers told us back in the summer during prospect camp that he expected to play in Wisconsin this year with the Badgers if they lost players to the pro ranks. However, Joe Faust got the call from coach Mike Eaves instead and Hesketh headed for the USHL.

Sioux City head coach Luke Strand described Hesketh saying "he can really skate, he's instinctively solid, he defends extremely well because he's got a lot of skill with his stick and he can really close on people. His feet are tremendous. He's a competitive guys that wants to continue to improve his stature as both a player and a person."

The change of scenery from last place Chicago to the competitive Musketeers can only help. He'll join other NHL drafted players like Alex Velischek (PGH), Caleb Herbert (WSH) and Max Gaede (SJ). Ironically, Hesketh and Gaede are also both property of the Edmonton Oil Kings and would be teammates in the WHL should they decide to jump to the CHL.

When last I spoke with Oil Kings GM Bob Green about the pair of listed prospects he explained that both were still on their protected list. I got the sense that the potential for Gaede to come to the WHL was greater than Hesketh but with the way things have gone for the former Minnetonka Skipper, who knows?

I'm sure Hesketh's intention and focus is still on joining the Badgers ASAP but I wonder if Mark Osiecki's departure for Ohio State, his snubbing for this year and the draw of playing in Edmonton with the Oilers owned WHL team... does all of that open the door even slightly? Probably not. When we had Hesketh in studio he was near adamant that he was pursuing the NCAA path but again, that was before all of the events of the last 5 months. 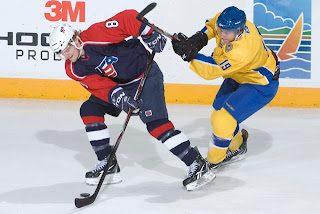 As for Gaede (photo: Andy Devlin), he played well at the World Junior A Championship in Penticton and I know the San Jose Sharks are fine with his choice to join Minnesota State next year. I've spoken with a handful of scouts though who agree that the 6'2, 195 lb Gaede in the WHL would be a high impact player and that should he choose to play for the Oil Kings next year, few would question that decision. He has 14 points in 20 games this year.

Edmonton's WHL team is certainly on the rise and could very well be a contender in 2011-12, especially with the potential additions of Hesketh, Gaede and another USHL player, Henrik Samuelsson who is currently playing with the US-NTDP.
Posted by Guy Flaming @ 2:42 PM

yes... thanks. Too many damn schools in Minnesota!