It might be a bit homer-ish to make note of it but it's of interest for me to see how the local guys are viewed by the masses. Not surprised at all to see Michael St. Croix coming in at 36th - that's about where I expect him to go in the draft unless his offensive production continues to increase beyond its current pace. I was really pleased to see Travis Ewanyk's name well inside the top 100. Coming in at 70th, mid-3rd round range, is pretty decent for a guy who excels at everything outside of piling up points. I'm sure Keegan Lowe would admit that his season didn't begin the way he'd hoped but he's been better as of late and seeing him ranked 151st is probably as good as his overall performance this year deserves. As a guy who made the U.S. entry at the Ivan Hlinka tourney last August, a strong second half and a bump up the ranking isn't out of the question. Finally, netminder Laurent Brossoit comes in #14 on the goalie list which is by no means a guarantee that he'll get drafted. However, strong play as of late should lead to more playing time and that would mean a jump up. Good to see the local club's drafting and developing is still going the right direction.

4. The Fall of the Giants

David Musil, ranked as the top WHL blueliner two months ago, has been passed by both Duncan Siemens (14th) and Joe Morrow (16th). Musil tumbles all the way down to 26th overall and you have to wonder if it was a case of overrated early on or if his play has dropped off. I'll lean more to the former as when I watched him in person 3 times this year (admittedly a small sample size), he didn't wow me once outside of his ability to cover a lot of territory. He's a big guy, tough to get around, but he's not overly mobile. I don't know Joe Morrow well, tough to get a read on a player when his team only comes around every second year, but I know I like Duncan Siemens more than Musil. Same size and he shares all of Musil's strength but has the skating the Czech lacks. That said, I was still surprised to see Musil drop this much and I won't be shocked if he ends up being taken in the top-20 this June.

The bigger surprise to me was the omission of goalie Brendan Jensen. Ranked 3rd in the WHL in the prelim rankings, Jensen was out-of-this-world good against Edmonton stopping 35 of 37 shots at Rexall Place on October 30th. He didn't have a great outing a month later against the same team though and so, small sample size again, maybe the first time I saw him was the anomaly. Still, to not see his name anywhere in the top 33 goalies had me pulling a double-take. 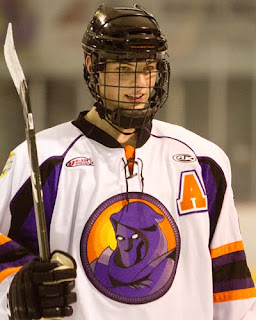 The are an even dozen North American defencemen ranked in the top-40 and only two of them are under 6' tall. Dynamic Ryan Murphy checks in at at 5'10.5 and is ranked 10th while Xavier Ouellet is just a hair under 6'. Other than those two, it's all about size starting with #7 Niagara Dougie Hamilton (6' 4.25", 193 lbs.), #14 Duncan Siemens in Saskatoon and #15 Scott Mayfield from the Youngstown Phantoms (both 6'3 and 197 lbs) and anchored by #27 ranked Jamieson Oleksiak (6'7, 244 lbs) from the Northeastern Huskies in the NCAA. Clearly, when it comes to drafting defenders, size still matters. (Photo: USHL Images) 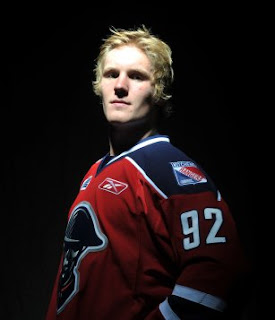 For most people, the 2011 featured a 3-player vanguard of Sean Couturier, Ryan Nugent-Hopkins and Adam Larsson. The first time I heard anyone state that consensus top-10 respect Gabriel Landeskog could crack that grouping was Sam Cosentino when he was on The Pipeline Show way back on December 7th. Since then Landeskog's stock has continued to go upward and I was prepared to see him pass RNH on the rankings but did not expect that he would supplant Couturier too. I think seeing the Kitchener forward ranked #1 caught a lot of people by surprise. That's not to suggest it's incorrect or unjustified, but it was a surprise. (Photo: Kitchener Rangers)

1. Banner Year for the QMJHL

Don't look now but after several down years compared to the OHL and WHL, the 2011 Draft is shaping up to be very Q-heavy. Central Scouting has 4 QMJHL players slotted in their top-12, three of them just from the Saint John Sea Dogs (Jonathan Huberdeau, Nathan Beaulieu and Zack Phillips). A fourth Sea Dog, Tomas Jurco, pops up at the #24 spot making Saint John this year's must-watch team. Sprinkle in Victoriaville winger Phillip Danault and Montréal blueliner Xavier Ouellet and the Q-league is very well represented indeed.
Posted by Guy Flaming @ 1:39 PM