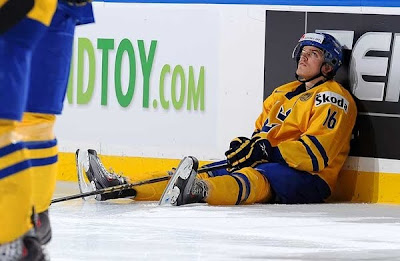 
Clearly an icing call, in the replay below you can actually see the back linesman's arm in the air as the puck is sailing through to the end boards. How and why the other linesman called it off will probably never be answered but best guess is that Tim Erixon (CGY) was judged to not have tried hard enough to intercept the errant Russian pass.

After the game netminder Robin Lehner (OTT) didn't hold back with his thoughts:


Aside from his random reference to Canada, (The Swedes have argued WJC officiating bias in favor of Canada in the recent past), I can't say I disagree with what the goalie said there at all. I also like that after his rant he owned up and said he himself needed to be better and that the one blown call did not cost his team the game.

The Swedes rallied from the 2-goal deficit and actually took the lead late in the final period before surrendering the tying goal. The shootout only saw one goal and ended with what I thought was pretty unsportsmanlike; a taunting celebration by Denis Golubev as he glided past Sweden's bench (below). 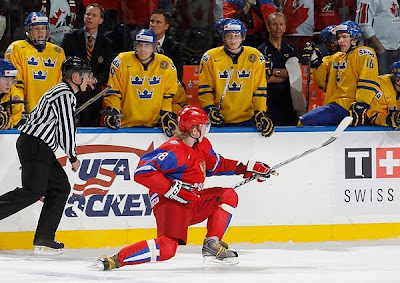 Captain Anton Lander (EDM) had to score but rang his shot off the iron giving Russia the win. The Oiler 2nd rounder was clearly dejected as he sat on the ice at his team's bench (above).

Whether you were cheering for Sweden, Canada, Finland or Spain... you want to see your team win or lose without the impact of flawed officiating. That wasn't the case yesterday and the Swedes have a right to be pissed off.

(All Photos: Andre Ringuette/IIHF Images)
Posted by Guy Flaming @ 3:20 AM

Usually it is the front linesman that chooses to wave off an icing because he is usually the closest and in best position to judge. This wasn't the case here. Looking across the ice, he misjudged how close the defenceman was to the puck. Looking across the blueline, he didn't have a good angle to judge depth when the puck when behind the d-man.

Second, it is a rule of thumb that when the player turns away from the puck, the linesman waves it off. This is because it is a common trick to try to make it look like you are skating hard but not able to reach for the puck. I don't think that's what the defenceman was doing here, but I'm sure that went through the linesman's head.

I'm not trying to argue that he made the correct call here, but I hate to bury the linesman when people have to understand how many factors often go into making a decision very quickly. I've been a Junior A linesman and been in similar situations.

In this case, he should have let the back linesman, who initiated the icing call, make the judgment if the d-man could have played the puck because he had a better angle on it. But a lot more goes into these calls than most people realize.