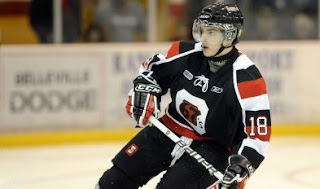 
I haven't seen it made official yet but expect that it will start popping up all over later today.

No confirmation on which player Prince is replacing although Gabriel Landeskog seems like a reasonable assumption. Prince is second in OHL scoring with 74 points.

Last weekend E. J. Mcguire from NHL Central Scouting was on The Pipeline Show and indicated that both Prince and Edmonton Oil Kings forward Michael St. Croix would be very high on the list to be called in should injuries impact others.
Posted by Guy Flaming @ 8:36 AM