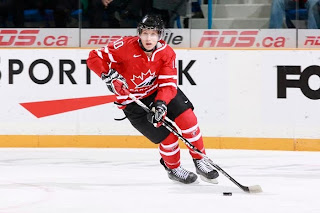 
The deal breaks down as this: Brayden Schenn and a 2012 3rd Round Draft Pick head to Saskatoon and in exchange, the Blades send back four draft picks: 1st and 2nd round picks in 2011, a 1st Round in 2012 and also a 1st in the 2012 CHL Import Draft. Brandon also gets a pair of prospects, Tim McGauley and Ayrton Nikkel, who were Saskatoon's 1st and 2nd round picks at the 2010 WHL Bantam Draft. 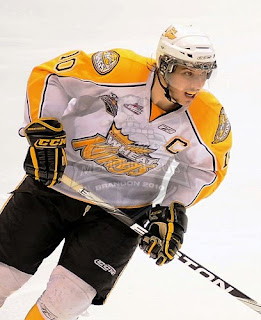 Going back to the time when the Los Angeles Kings sent Schenn to the Manchester Monarchs, talk about his return to the WHL and subsequent trade has been bandied about. Right from the get go, two teams were mentioned as front runners; the Portland Winterhawks and the Saskatoon Blades.

The Winterhawks made a big move right before New Year's when they grabbed Craig Cunningham from the Vancouver Giants. That pretty much signaled that they were not going to be in the hunt for Schenn.

More recently some speculation had Schenn potentially in the sights of the Medicine Hat Tigers or the Spokane Chiefs. Moose Jaw was even mentioned.

In the end the WHL offensive dynamo ended up going to where many initially thought that he would, his hometown of Saskatoon.

Schenn has played for 4 teams this year; in the NHL with Los Angeles where he 2 points in 8 games, in Manchester he scored 7 points in as many outings, back to Brandon for 2 games and 4 points as well as for Canada at the WJC where he equaled a Canadian record with 18 points in the tournament. In 2009-10 Schenn ended the WHL campaign with 99 points in 59 games.

The question now is, if the Saskatoon Blades were the fourth best team in the country before the deal... what are they now? And while most pundits have seemingly anointed the Portland Winterhawks as 'The Team to Beat', does this change things?

Clearly the Blades are the top team in the Conference and I think most would agree even after yesterday's deal that saw Cody Eakin land in Kootenay with the 2nd place Ice.

But has Saskatoon done enough to take the league Championship and represent the WHL at the Memorial Cup in Mississauga this May?

What probably shouldn't be lost here is that Brandon has done an excellent job of asset management. Yes they lose a franchise player but with the picks and players coming back, Kelly McCrimmon can be on the fast track to a rebuild. And with Schenn now gone, is there really any point in holding onto Scott Glennie? The Wheaties might not be done today.
Posted by Guy Flaming @ 12:40 PM

And while most pundits have seemingly anointed the Portland Winterhawks as 'The Team to Beat', does this change things?

No offense to Craig Cuningham, but Brayden Schenn he's not. There's just more there with Brayden, and it gives Saskatoon arguably the leagues most complete top-six. Schenn, Hamilton, Viedensky, Nicholls... these guys will beat you defensively on the way to scoring 1.5 points-per-game each.

Question is does Brayden Schenn single handedly boost Lorne Molleken's PP? That is perhaps the Blades only weak point.

I can't wait for the playoffs.