They were definitely the comeback kids as the Russians battled back from multi-goal deficits against Sweden, Finland and Canada en route to their 13th U20 gold medal finish. 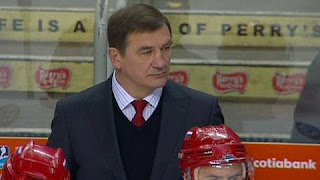 Considering the recent disasters for Russia at the 2010 WJC and the 8-game Super Series a few years ago, I think that Head coach Valeri Bragin deserves a lot of credit. Not only for keeping his team from quitting at any time in the tournament but also formaking a goaltending change in the final. Like the last year against USA, Canada chased the starting netminder but the back up came in and shut the door.

Igor Bobkov (ANH), who started the event but lost his job after the Boxing Day loss to Canada, earned redemption after replacing Dmitri Shikin when the score was 3-0. Bobkov, the only CHL player on the Russian squad, was tested immediately but weathered the storm and was perfect the rest of the way.

Vlad Tarasenko's (STL) goal, the equalizer for Russia, was a thing of beauty after a masterful pass to the slot from Evgeny Kuznetsov (WSH) along the boards. Artemi Panarin scored twice for Russia getting the first and eventual game winner as well.

For Canada, this one will sting for a long time. After playing two periods of solid hockey, they couldn't close the deal. They were not nearly as physical against Russia as they were in the semi-finals against the Americans and I thought before the game that if they stuck to that game plan they'd be successful.

Cody Eakin (WSH) played a hell of a game for the red and white. Brayden Schenn (LA) and Ryan Ellis (NSH) had record setting tournaments and Ryan Johansen (CLB) further established himself as a premier NHL prospect. Curtis Hamilton (EDM) elevated his reputation as did Marcus Foligno (BUF) and Tyson Barrie (COL).

Unfortunately for the Canadians, when they needed a Jordan Eberle to score the clutch goal(s) in the dying moments, the closest guy on the roster to fill that role was watching from the stands. The injury to Jaden Schwartz (STL) should not be forgotten nor the fact that Gabriel Landeskog played just one game for Sweden. Those were two massive losses for those two countries to try and overcome.

I'm sure the game will be dissected for a long time but one thing is for certain, it sets up a really intriguing storyline already for 2012 in Alberta.
Posted by Guy Flaming @ 8:04 PM

I dont think this team missed Eberle at all. What this team missed was a goalie to stop the pucks. They needed the coach to calm them down. It looked as if they thought they won the game after leading 3-0 in the 2nd period.