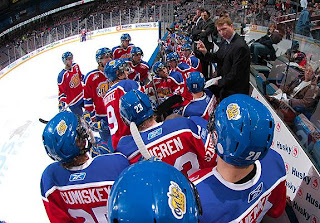 The Edmonton Oil Kings have completed their 3-day Orientation camp for their 15 and 16 year olds. The camp was held at NAIT arena and featured a couple on ice sessions over the last couple of days.

Two things stood out to me. First, it's stunning how much a kid can grow in 1 year and goalie Cam Lanigan is a prime example. Lanigan will be in the mix to win the back up job with the team this year and after being drafted last season as a good sized 6' goalie he's now 6'3 (I'm told). T.J. Foster (pictured in red below) might have been 5'9 last year but he's got to be 6' now and showed so pretty nifty hands too.

The other thing that was apparent was just how much more skill was on the ice compared to a year ago. 12 months ago there were nothing but, excuse the expression, but league castoffs out there. Let's face it, aside from Robin Figren, Tomas Vincour and maybe a couple of other guys... it wasn't a very skilled line up the Oil Kings had to work with.

From what I saw today, the future looks good. Goaltending two years from now with Lanigan and Laurent Broissoit should be more than solid. Both are big and look comfortable on the ice. It should be a position of strength in 2 years... this year, who knows. 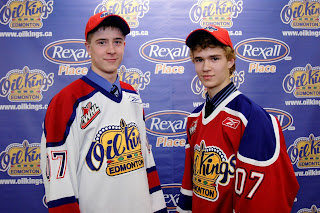 Mark Pysyk (pictured in white) is ranked 5th in for the NHL 2010 draft according to the Hockey News... but that's a long way away. He should be a regular with the big club this year though.

1st round pick Mike St. Croix has skill. He won't play with them this year, maybe a road game in Brandon or something but that's it, but St. Croix will be a name in this town in a couple of years.

Next on the agenda for the Oil Kings is the CHL Import Draft which goes 10 days after the NHL draft... so the calendar says June 30th. After that there is nothing for July. August has the team's rookie camp which leads into main camp, all that happening the last 10 days of the month.

Last year the Oil Kings hosted a 6-team mini-tournament in St. Albert. They are doing it again but it will only be 5 teams, at least so far. Returning from last year will be the Regina Pats, Prince George Cougars, Kamloops Blazers and of course the Oil Kings. New to the mix are the Medicine Hat Tigers. Not coming this time are Swift Current and Kelowna but I'm told a 6th team could get added yet.

That tournament will go over the Labour Day weekend just like last year.
Posted by Guy Flaming @ 3:04 PM