Bulging on the Blueline

The Edmonton Oilers AHL affiliate is going to have a talented but young defence corps in 2008-09 and with the recent draft and a veteran signing, the blueline is starting to bulge.

By my count, and it's changing every couple of days it seems lately, there are 9 or 10 players who are in the mix for Springfield. I expect another AHL vet, maybe even 2, to still be added so clearly there are a lot of options here for coach Jeff Truitt and the Falcons.

T.J Kemp, Allan Rourke, Rick Berry and Harlan Anderson will not be back. Neither will Danny Syvret who was traded to Philadelphia a few weeks back. I also believe that T.J. Reynolds will be employed elsewhere so there will be planty of new faces on the squad. 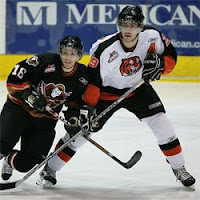 So who will patrol the backend for Springfield? Returning prospects Bryan Young and Theo Peckham will provide much of the muscle and physical play but they'll get help from newly drafted Jordan Bendfeld (pictured on the right). Mathieu Roy is obviously not a shoe-in for the NHL roster despite his 1-way contract and that might also keep him from getting claimed on waivers should Edmonton send him down. That will provide the AHL club with 4 bodies that can all bang and crash and aren't afraid to drop the gloves (although it's pretty rare for Young to do so).

On the other side of the ledger you've got the puck moving offensive types, a weakness on the farm last season. Leading the way in 2008-09 will be Taylor Chorney, once he gets officially signed that is. Add Cody Wild for his first full rookie year and Sebastien Bisaillon (above left) who will look to rebound from injury. Josef Hrabal comes to the AHL with 4 years of pro experience so he should be able to make a pretty smooth tranistion to the North American game. With Thursday's signing of Mike Gabinet, the Falcons will have 5 guys who can move the puck or skate it out themselves.

That's 9 bodies right there and I'm told there could still be one or two more before training camp in September. Obviously there is plenty of time for trades and free agent signings so things could look much different 2 months from now... but it's intersting to see how the AHL blueline is shaping up.
Posted by Guy Flaming @ 1:51 PM

""With Thursday's signing of Mike Gabinet, the Falcons will have 5 guys who can move the puck or skate it out themselves.""

This assumes that the Falcons will have a Coach that allows the D to do that and not make them bang the puck out off the glass.