It's been something Edmonton have been trying to set up for the last few years but for the first time it appears that this fall fans of the Oilers, Calgary Flames and Vancouver Canucks will be treated to a prospects tournament.

Other NHL teams have done it for years with the most popular being the Traverse City event that is hosted by the Detroit Red Wings. That is a 6-team tournament whereas the one involving the 3 western Canadian teams will be a 4-team exhibition. If you're wondering who team #4 is going to be well look no further than the University of Alberta Golden Bears.

Basicaly it's an expansion of the annual UofA Golden Bears vs Oilers rookies game that is a highlight of training camp each September. And don't think for a second that the CIS club will be the weak sister in the 4-team format; they've got a winning record against the Oilers over the last decade with some of those games not even being that competitve as the Bears have wiped the floor with the Oilers. 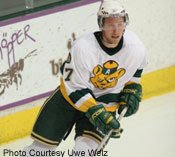 I first got word of this in early June talking with Kevin Prendergast at prospect camp. It almost happened a couple years ago but was wiped out by the NHL lockout but better late than never right?

My understanding is that the games will be played in Red Deer but as far as I know that has yet to be confirmed. I don't know how many days the mini-tournament will last or if it will be a round robin or what. (It will be a topic for discussion when KP appears on TPS this coming Tuesday).

Yesterday on Total Sports with Bob Stauffer, UofA head coach Eric Thurston mentioned the mini-tournament is on his team's schedule so clearly plans seem to be getting firmed up.

Bottom line: it should be a lot of fun to watch Leland Irving, Cory Schneider (goalie pictured), Bryan Pitton and Aaron Sorochan square off in net... Michael Grabner, Taylor Chorney, Ian McDonald and Swede Mikael Backlund (pictured up top) leading the charge for the skaters.

Something to look forward to for sure!
Posted by Guy Flaming @ 3:15 PM

Super news! The Bears-Oilers have always been a highlight of training camp.
An expanded tourney is all the better for the hockey enthusiasts of Western Canada.

A great idea to increase the comeptetive nature between the Western Canadian teams' prospects, before they get to the show. This'll give Robbie Schremp a chance to perform his way onto the roster by beating up on other NW division prospects.

I remember the first time they brought it up with me, I think it was the year before the Flames/Oilers rookie game that one year... seemed like a no-brainer to me and I'm really surprised it took this long for it to finally come together.