A few weeks back we had Camrose Kodiak forward Joe Colborne blogging for us while he was at the Royal Bank Cup. As the draft approaches Joe is kind enough to jot down some more thoughts for us, giving an insiders look at the NHL draft. We're also excited to have Regina Pats forward Jordan Eberle on board to blog as well. Keep checking back for Jordan's thoughts but in the meantime, here's Joe's Journey part 2. 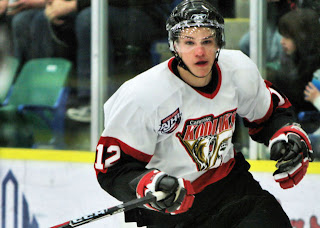 Hey, its Joe Colborne again, and I was just asked to do a quick blog on my experiences at the NHL Draft Combine a few days ago.

For those of you that are not aware of what the Combine is, it's a somewhat hectic gathering of all 30 NHL teams, and they bring in 100 or so of the top ranked players for the upcoming NHL Entry Draft. NHL Central Scouting Service does all the organizing of the event, and they put us through some pretty strenuous physical tests, while offering the teams an opportunity to interview the players as well. This is really the last official event to move up or down the depth charts for each team before the draft, and as it is the first time many players meet with the scouts and General Managers, it is quite important.

Luckily for me, I had quite a bit of support from some friends who had already been through the Combine, so I had a vague idea of what was to come... or so I thought.

I flew out on Wednesday morning and got into Toronto in the mid-afternoon. It was quite a challenge finding my way through the airport, but after meeting up with a few other players who were just as lost as I was, we figured it out.

Once we got to the hotel, I signed in and was told that I had only about 20 minutes until I had the first of my interviews, with the Montreal Canadiens! Because I have signed to play in the NCAA with the University of Denver, there were regulations in place that said I was only allowed to be at the Combine for 48 hours. Most of the CHL and European players were staying there for a whole week, which allowed them to spread their interviews out over a number of days.

So, I raced up to my room, threw on a suit and got to the Canadiens room at the hotel with a few minutes to spare. I was pretty nervous, but once I got in the room and got talking with the Canadiens' staff, I felt more and more at ease. From there, I had 4 more 20-minute interviews that night, with 5-minute breaks in between. After the interviews, I went back to my room and relaxed with my roommate, Michael Stone of the Calgary Hitmen.

I was up at 7 am Thursday morning as I had 22 interviews scheduled for that day starting with the Flames at 8:30am and ending with the Sharks at 7:30pm! I learned just how tiring walking around a hotel and talking could be! Most of the interviews were fairly laid back, as the team personnel just wanted to get to know my personality while asking a few questions that they had thought up. Some teams would try to throw out questions to get me flustered, like- Would you cheat to win?, or they would ask me to try to name all the players on their team. Overall, it was a positive experience, and I hope I made a good impression on each of the teams. After the interviews, I was lucky enough to head out to Wayne Gretzky's restaurant in downtown, with my family advisors Mark Mackay and JP Berry, and my fellow Calgarian Tyler Myers. JP had a little surprise for us as once we sat down, Mats Sundin walked in and sat down with us for a while!

Friday was the day allotted completely for physical testing and medical examinations. It was another early morning, as I had to get the testing done and catch my flight back to Calgary before my 48 hours was up. Little did I know that I was the very first person to get put through the paces. After about an hour of medical examinations and getting hooked up to countless machines testing different elements of my body, I was escorted up to a huge banquet hall that was packed with scouts, GM's and media. Being the first player there I got to experience having two TV cameras follow me around as I worked out, and I could feel all the eyes boring into me as they took down my body fat and began to test me with different exercises like push ups, sit ups, Bench Press, Vertical Jump, Long Jump, Grip test, flexibility among other tests as well. However, when I saw Steve Stamkos doing his workout a few guys behind me, he had about 4 cameras in his face, so I could easily handle 2.

Then came the bike tests. The first one was the Windgate, only a thirty second ride, but those 30 seconds seemed like an eternity. After a quick 10-15 minute break to recover (and a pound or two lighter after throwing up!) I was back on the bike for the last test, the VO2 max. After that was done, there was no time for recovery as I had to get back up to my room, pack up, and catch my flight.

Overall, it was a whirlwind two days, and a great experience. Looking back now, I feel pretty good about the whole thing, and can't wait for the draft!
Posted by Dean Millard @ 12:17 AM

I've read all these media reports about the combine, but your short recap was the most informative and interesting. Thanks, and good luck!