Every year good players fall through the cracks and don't get drafted. Too small, didn't play enough during their draft year, not seen enough by NHL scouts, late bloomer; there are lots of reasons it happens but every year it does and then the next draft some of those guys get scooped up as overagers.

Here are some of the top guys that fit the category this year and I'm sure we missed a couple good ones so feel free to add their names in the comments section! And YES... i realize my top 5 list has 6 names on it.

He was passed over in both 2006 and 2007 and a big part of the reason why is the lack of a transfer agreement with Russia. But with an outstanding performance at the 2008 WJC in the Czech Republic, the 6' Russian forward could be a priority target for some teams this time around. Like 1st round priority. He had several interviews at the NHL combine and one scout I talked to couldn't say enough good things about him including his total shock at Tikhonov's grasp on English (He's fluent with no accent). Tikhnov actually grew up in California when his dad worked for the San Jose Sharks and in fact the 20-year-old only got his Russian passport in the last few years telling the NHL scout that he's spent a lot more time in North America than he has in Russia. He played for Severstal Cherepovets this past season and had 12 points in 43 games.

Last year there were scouting agencies that had Karamnov listed as a potential first rounder but teams stayed away because the player had expressed no desire to play in North America. Imagine the shock and dismay of those NHL teams when just two months later Karamnov turned up in the WHL playing for the Everett Silvertips! The Moscow native had 25 points in his rookie year with the 'Tips playing in a 2-way role. He was invited to training camp by the Edmonton Oilers last fall, one of the teams who had initially toyed with the idea of drafting him. Will he get picked up this year now that his intent on playing on this side of the pond is without question?

Last year Central Scouting had the Finnish netminder listed as the 4th best goalie in Europe and yet no team took a chance on him. Why? He's listed at 5'10 and 165 lbs, that's why. However, this past season with the Lethbridge Hurricanes should give teams reason to reconsider his ability to play. He 1.98 GAA and .916 SV% in 23 regular season games, was named CHL Goalie of the Week twice this past season (March 3rd and April 15th). In the playoffs he got the nod from coach Mike Dyck and carried the load for the Hurricanes. His post season numbers were solid again including 3 shutouts in 18 games.

Originally drafted by the Columbus Blue Jackets in the 4th round (113th overall) in2006 but was surprisignly not signed to a contract and so re-enters the draft pool this year. Wright was named captain of the Hurricanes at the start of the year and represented his club well this past season. He had 10 points in 19 playoff games after a 38 point regular season where he boasted a plus-15 rating. He's 6'2 and a hair under 200 lbs, plays a solid 2-way game and could be compared to a guy like Steve Staios, a leader that can round out a defensive corps with dependable play in his own end and chip in some points as a bonus.

The OHL Goalie of the Year was a major factor why the Bulls fared as well as they did this year in getting to the Memorial Cup. Passed over in previous years because he'd never played more than 18 games in a OHL season until this year where he was stellar in 44 outings. His 2.24 GAA and .929 SV% were the best in the regular season. Head coach George Burnett told me that he had no qualms about Murphy's potential as a pro and the 5'11 keeper should be poised for a huge year in 2008-09 with the Bulls. 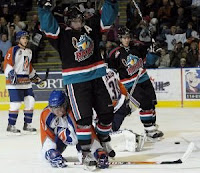 Last but not least, this California product had a massive year for the Rockets finishing the year as one of only two players to break the 100-point plateau in the WHL (Nashville's Mark Santorelli won the scoring race with 101 points). Long isn't big at 5'11 and 175 lbs and of his 100 points only 31 were goals; some I have spoken to suggested to me that linemate Jamie Benn's transfer from the BCHL was the key to Long's success. However, to me that just goes to show that with a talented linemate Long has proven that he can raise his game and play that complementory game very well. Certainly worth being drafted in my opinion, the question is "how high"? Colin was recently invited to try out for Team USA in Lake Placid where they are going to build their 2009 WJC squad.

Tonight on the show we're airing the Nikita Filatov interview, you won't want to miss that one, plus we're also recapping our mock draft picks 1-25 and announcing our final 5 of round 1. If you miss it, I'll be psoting both of our lists on the blog in the next day or two.
Posted by Guy Flaming @ 11:00 AM