Less than 24 hours to go until the draft begins so I figured it's time I release my list of names I expect could realistically become Oilers in the first round tomorrow evening.

One of the local writers I have a ton of respect for, Robin Brownlee, had an interesting list earlier today although he admitted a couple of the 4 players would more than likely be gone before the 22nd pick came around. My list is strictly going on the premise that there is no trading up as I don't believe they will, although adding multiple 2nd and or 3rd round picks is what I'm hearing.

The following four players are realistically going to still be available at 22, in fact all four of them might still be there. It's an interesting mix of position where as most fans look at the depth chart at say 'they don't need a goalie or any defencemen'... those fans might be upset by what happens tomorrow evening.

The Oilers want a scorer with size. Well, at 5'10 and 175 lbs, Eberle isn't big but his 42 WHL goals certainly put him in the former category. Kevin Prendergast told Pipeline Show listeners that in the first round, size won't matter so if Eberle is still there... my money is on him being the right guy. Millard and I have both had him as Edmonton's pick in our mock draft for over a month and you regular listeners know that we've been throwing out this name for at least that long.

I have reason to believe though that Eberle might be off the board by then. Speaking with a source in Calgary I'm hearing that the Flames are eyeing up Eberle or Joe Colborne as a consolation prize should Airdrie native Zack Boychuk be gone. 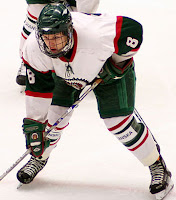 He's a smallish, offensive defenceman out of Sweden that put up nearly a point per game this past year. He checks in at 5'11 and 165 lbs so he's still very immature from a physical perspective. Moves the puck well, skates "like a forward" and can make that all important first pass. This is a name that seems to be gaining steam from around the league as the draft has been getting closer. One non-Oiler source predicted that Karlsson wouldn't make it out of the top 20 so who knows if Edmonton would even have a shot. Although he's a similar player to the Chorney's and Wild's that Edmonton already has on board... you can't have enough of these types of players in this day and age.

Speaking of defencemen, this 6'2 and 212 lb blueliner has a big shot, plays physical, can skate, solid in both ends... sounds like the perfect package. Draw back seems to be inconsistency but what 18 year old doesn't struggle with that some time? He was committed to going to UMass next year but has decided very recently to play in the OHL instead - the London Knights to be specific. I have spoken to a few different hockey people about that, not this case specifically but in regards to players who bolt from their NCAA commitments at the last minute... and not many seem to be fans of that choice. Not following through after making that commitment to is a red flag that some say suggests a character flaw. 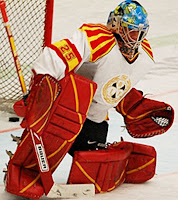 Yes I know he's a goalie but as someone very recently pointed out... if you can draft a bona fide stud goalie it could set you up for a decade. Edmonton has Deslauriers and Dubnyk in the system but Markstrom, I'm told, is a much better long term prospect that either of them. He was outstanding at the U18 tourney in Moscow and I know he caught Edmonton's eye there. He's 6'3 and 180 lbs, and had a 2.00 GAA and .931 SV% in Sweden last year. In the summer of 2007 he was in net when Sweden beat Canada for their first gold medal ever at the Ivan Hlinka Memorial tourney and he had to stop Steven Stamkos, Kyle Beach and Kelsey Tessier in a shootout to do it.)

If all four are still there... Eberle is the name I expect to hear called.

Three names to watch for in later rounds - Russians Viktor Tikhonov and Evgeny Grachev; although I've always suggested Edmonton and Russians go together like strippers and church... this year could be different. Tikhonov grew up in California and speaks flawless English whereas Grachev has the size and scoring to be a reasonable target. Kelsey Tessier of the Quebec Remparts was on Mike Oke's 'over-rated list' during the ISS Draft Preview show but I'm getting the feeling the Oilers would take a chance on him if he slid to them later in the draft.

Trying to guess who will be picked by a specific team at a specific spot is pretty tough, especially this late in the draft. I don't know if anyone could have correctly predicted that Alex Plante would become an Oiler at the 15th spot... of, wait, yes I believe someone did predict that. In fact, last year on the air during the draft I was 2 for 3 with Edmonton's 3 picks.

TEAM 1260 will be live on location at Northlands from 3 PM-Midnight in the new sports lounge with our draft coverage... hope to see you there!
Posted by Guy Flaming @ 2:15 PM