Jury is out on Brule

Tuesday night Dean and I had a special 3-hour edition of The Pipeline Show in honor of the opening to UFA hunting season. The Oilers made news with three seperate trades over the last week and I was asked that night, and have been asked several times since, what my thoughts were on those deals. As I said on the air on Tuesday, I have issues with all 3 but the trade that I have the most concern over, from an Oiler pespective, is the Raffi Torres for Gilbert Brule swap.

First let me say that I felt dealing Torres was smart; big contract, extremely streaky and just seemed to have confidence issues all the time. His goal scoring has dropped significantly over the last 3 season from 27, 15 to 5 last year (injury shortened but on pace for only 12ish).

Still, Torres is at the very least a proven NHL calibre player who does have a pair of 20-goal seasons on his 3.5 year resume. That's why I'm suprised that the best return Lowe was able to find was Brule. As I told Jason Gregor (off the air) during TPS, if the Oilers had traded a prospect who was struggling, say Marc Pouliot, for a player who had Torres' resume... Oiler fans would be ecstatic. (Gregor evidently liked the analogy as he used it on Just A Game about half an hour later).

Now don't get me wrong, I have no vendetta against Gilbert Brule and sincerely hope to one day be proven completely out to lunch with my concerns. I never got to see him in person while he was with the Vancouver Giants but I've spoken with enough scouts over the last few years so I have no trouble recognizing he was a superb WHL star. He had 39 goals and 87 points in 70 appearnaces during his draft year but it was the next campaign when he really hit stardom in my opinion. 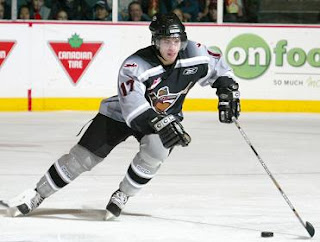 He began the year with the Blue Jackets but after 7 games broke his leg and fractured his sternum forcing his return to the Giants. Once he got healthy again he went on a tear racking up 38 points in 27 games to close out the season. Then in the playoffs he had 16 goals and 30 points in just 18 games as he led his squad to the Memorial Cup in Moncton. The Giants didn't reach the finals but I was told by several scouts that Brule was easily the best player in the tournament; "It was the Brule show".

Brule was then chosen 6th overall by Doug MacLean and the Blue Jackets. That year he was my pick for 'over-rated player' amongst the first rounders. He was in my first round but not in my top 10 simply because I didn't believe he could play the same way he did as a junior once he turned pro and still have the same sort of success. So far, I've been right.

Brule is definitely fast, clearly an asset in Edmonton, and he has hands. Yet described more as a goal scorer than a playmaker, somehow after 148 NHL games Brule still has lit the lamp only 12 times and did so just once last year in 61 outings.

He's listed at NHL.com as 5'10 and 189 lbs so it's understandable why his aggressive bowling ball junior mentality hasn't equated to production in an offensive sense; he can't dominate physically and create room for himself now like he did with the Giants.

Bob Stauffer, my colleague at TEAM 1260, is a pretty sharp guy and pointed out that Craig MacTavish has had a lot of success with developing young centermen. That's true but unfortunately since turning pro Brule has been converted to the right wing. Besides, he's not going to play ahead of Horcoff, Gagner, Cogliano or Brodziak so he'd need to acclimate himself to a wing spot in Edmonton anyway. 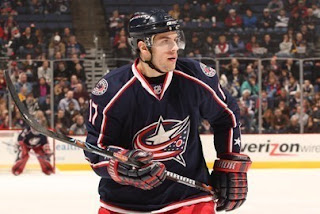 Aaron Portzline from the Columbus Dispatch was a guest on the last edition of TPS and made it pretty clear that Brule, in his opinion, was rushed into the NHL. The Oilers are receiving a player who was a top line scorer as a junior but might best be suited to a 3rd or 4th line Darcy Tucker-like role as a pro. The feisty energy player who can still contribute on the score sheet from time to time. But something tells me that Brule, not unlike J.F. Jacques and Ryan O'Marra over the last couple years, hasn't come around to that idea yet.

Checking in with Oiler capologist Rick Olczyk on Thursday I confirmed that Brule does not need to clear waivers to be sent to Springfield - yet. With 148 games under his belt, Brule is 12 appearances shy of the 160 game mark at which point waivers will click in.

I personally feel Brule should start the year on the farm to try and rediscover his offensive game while playing on the top line for the Falcons. But how would he take that? He's only played 16 AHL games. Would he take a reassignment to the farm in stride or...

Portzline also described Brule as "quiet, soft spoken and very introspective" then went on to add that some in Columbus questioned how strong his desire is to play the game.

As a junior, Brule's two greatest strengths were his ability to score goals and to dominate physically. Both of those assets have eluded him as a pro so what does that leave? A fast player that can hit and can score but shouldn't be counted on to excel at either every night.

What I would like to see: Keeping in mind that this is early July and I reserve the right to change my opinion once I see him perform at training camp... but to me, a year on the farm would be a good thing with an eye on eventually replacing Fernando Pisani as the 3rd line RW. Moreau-Cogliano-Brule could be an extremely fast checking line in 2009-10.

Brule tidbits: Scored in his 11th game last year meaning he is currently on a 50-game streak without a goal. The game he scored in was in Los Angeles and he only played 5:29 that night, the second lowest minutes he received in a game all year. More often than not he played in excess of 9 minutes and quite often into the mid-teens.
Posted by Guy Flaming @ 12:04 AM

Where's Pisani going in your equation?

In a deal and the deadline in 2009. His contract won't appear as bloated as it has for the last couple of seasons but he's getting to the expendable stages of his career now. Someone will value him despite his price tag, the Oilers don't need a $2.5M 3rd liner though... especially if they're still looking to get Hossa again next summer.

You're bang on. Brule is on the farm along w/Schremp to start the season because they don't have to clear waivers.

Rushing kids up to bad teams hurts their development and he needs to regain his confidence.

Besides, everyone keeps forgetting the Oilers have 3 goalies on the roster which limits how many others can be carried. It's very possible that Roy is stuck (unless their's a trade) because a number of teams are short on the blueline right now (Ottawa, Tampa, Atlanta).

Will be a very interesting camp this fall.

I was reading the post and as soon as I saw that Brule was playing RW now, I immeadiately thought that he was the replacement for 34; then I get down to the end of the piece and Guy's come to the same conclusion.

My conclusion? Guy's getting smarter;)

Seriously, though, GF, that was a nice job of outlining his career so far and getting some insight from one of the BJ"s beaties and along the way you felt compelled to question one of Lowe's moves.

You're growing up right before my eyes:D